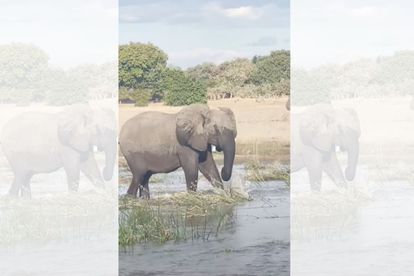 An unlucky crocodile found itself right underneath the feet of the world’s largest land mammal – the African elephant and unfortunately, did not make it to see another day.

The wildlife app, Latest Sightings shared the footage to its 2.55 million subscribers, saying that they’ve never seen an elephant attacking a crocodile before.

The unique sighting was captured by Hans Henrik Haahr while on safari in Zambia.

Also Read: Elephant knocks down a massive tree in the Kruger [watch]

The group explains that crocodiles are opportunistic hunters and have been known to prey on baby elephants.

But, this mother elephant was not taking any chances and was not happy with the crocodile being so close to her young calf. And so, in order to protect her calf, she removed the threat of the crocodile entirely.

“You can even see the elephant is lactating,” Latest Sightings explains. “She went up to the crocodile and started pushing it with her trunk and head, her behaviour got very aggressive, and she started trampling the crocodile. If you notice, the elephant doesn’t have tusks, so she is resorting to using her mouth for most of the attack.”

The mother elephant even went as far as wrapping her trunk around the crocodile’s tail and tossing it around while trampling it.

“The continuous trampling by the female elephant weighing between 2 700 kg and 3 600 kg resulted in the inevitable death of the crocodile. Hans said he had almost no words to describe the interaction, just that it was ‘shocking!'”

Social media users were left in awe, saying that this is the type of wildlife sightings they like to see: “Must have tried his luck thinking the trunk was a smaller animal,” said Mr T. “This is the most brutal croco kill video on YouTube,” said Arnav.