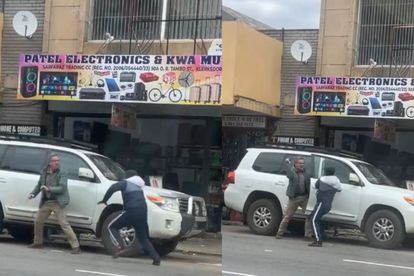 Is this man the SA ‘Rambo’? A Klerksdorp man fought off three robbers who attempted to steal from him. Images via Twitter @RomanCabanac

Is this man the SA ‘Rambo’? A Klerksdorp man fought off three robbers who attempted to steal from him. Images via Twitter @RomanCabanac

With trust in police and civilian protection from our men in blue at an all-time low, South Africans have been left to “Chuck Norris” their way out of life-threatening situations and attacks. A Klerksdorp man went viral on social media after he fought off three men with only a knife at his disposal…

According to the crime statistics from the South African Police Service (SAPS) between July and September 2021, more than 7 000 motor vehicle thefts occurred in Gauteng.

With crime on the rise in Mzansi, South Africans may have to add Leo’s Guide to Not Becoming a Statistic — the book by Leo Prinsloo, the fearless CIT driver who made international headlines as South Africa’s own “Rambo” last year — to their library.

In a tweet posted by @RomanCabanac on Wednesday 20 July, a man from Klerksdorp, in North West Province, was fighting off robbers who seemed to be gunning for his vehicle, a Toyota 4×4.

It was three against one, but that didn’t matter for this brave South African. He quickly whipped out his knife and pointed it in the robbers’ direction leaving them terrified.

All three robbers casually walked away from the scene, but a local woman captured the entire thing on her cellphone!

In the video she says: “Klerksdorp guys never sieze to f*cking… WHAT THE HELL?”

Reacting to the video, most tweeps were stunned while others questioned why the criminals walked away like nothing happened…

“How is SA not a fictional place? No way this place exists,” wrote one tweep.

“He’s mad brave. He’s got that dawg in him,” wrote another tweep.

“This is how you stand your ground.”

‘LEO’S GUIDE TO NOT BECOMING A STATISTIC’

In 2021, Leo Prinsloo went viral after his reaction to an attempted cash-in-transit (CIT) heist went viral. After the incident, Prinsloo released his book, Leo’s Guide to Not Becoming a Statistic, which offers South Africans tips on how to handle crime-related situations.

Prinsloo worked as a police officer for 17 years before starting his own training company, The Edge Shooter Training Academy.