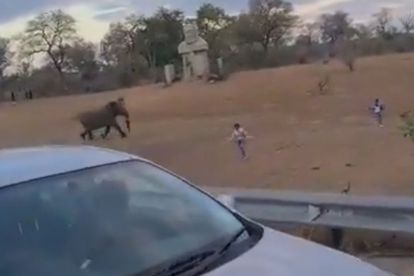 Tourists chased by herd of elephants. Image via screenshot from Twitter @@EdwardthembaSa.

Tourists chased by herd of elephants. Image via screenshot from Twitter @@EdwardthembaSa.

A viral video shows tourists running for their lives after being chased by a herd of elephants at Kruger National Park, posted to Twitter by a tour guide on 20 September.

TOURISTS JUMP OUT OF THEIR VEHICLE

One of the rules of going on a game drive is to never get out of your car. However, a group of tourists ignored the rule and decided to go and get a closer view of a herd of elephants and a picture of the Paul Kruger statue.

Although some stayed close to the safety of their cars, others ventured onto the grass. The elephants immediately ran towards these tourists onto the grass who had to then run for their lives to avoid being trampled and killed.

ALSO READ: Rhino Month celebrates 11 years: What you can do to help save the rhino

The video was shared by a tour guide named Edward Thembe on Twitter which was sent to him by a fellow guide from the park.

TWEEPS REACT TO THE VIDEO

The two tourists were able to flee the scene. However, this could have ended much worse, aside from the tourists being injured or killed, the animals could have been put down due to this. A Tweep brought this up in the comments section of the tweet.

“Next thing the poor animals have to be put down for someones kak thinking,” wrote @hilroy223.

Other Tweeps were also not impressed by the tourists risky behaviour.

“Who’s children are these?,” wrote @Trrjane.

“Why people do stupid stuff like this is just beyond me,” wrote @tumisangmafora.

“They are so careless. If you have seen how those beasts can crush the human body to a pulp you never even want to get into the reserve. Those things are so fast if they had really wanted those (two) would be dead,” wrote @EngDanielC.

ALSO READ: Zip across Sun City, one of the world’s fastest and longest zip slides