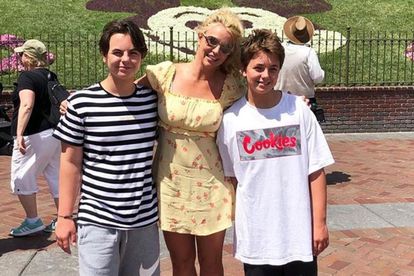 Britney Spears and her sons
Photo sourced via instagram @BritneySpears

Britney Spears and her sons
Photo sourced via instagram @BritneySpears

Kevin Federline has revealed that his two sons with Britney Spears have chosen not to go and visit their mother for months now, signalling a strain in their relationship.

Federline did an interview with Daily Mail, in which he gave his thoughts on what is happening with the pop star, including her cobtroversial conservatorship battle with her father Jamie Spears.

WHY BRITNEY SPEARS’ KIDS NO LONGER VISIT HER

Britney Spears’ sons reportedly told the same publication that choosing to not visit their mother, including attending her wedding, was a tough decision to make.

“The boys have decided they are not seeing her right now. It’s been a few months since they’ve seen her. They made the decision not to go to her wedding,” Federline said.

The former backup dancer and DJ recalls a period during which co-parenting with Spears was peaceful, but her relationship with her children has deteriorated. Spears and Federline share custody of their teenage sons Sean-Preston, 16 and 15-year-old Jayden.

Federline says the boys have witnessed things that made them uncomfortable during their visits to her home, but did not go into detail. He also notes the public spats Britney had both with him and her family, as well as her nude Instagram posts, but adds that both boys made the decision to not visit her on their own.

He further revealed that he supported her conservatorship and defended Britney’s father, who came under fire during the debacle.

Spears’ conservatorship battle gave rise to the  #FreeBritney movement, which saw fans and Hollywood rally behind the star. Under a conservartorship, she had no control over her $60 million fortune and always had to get approval from her father before making any purchases. She also revealed that she was prevented from taking out her birth control device.