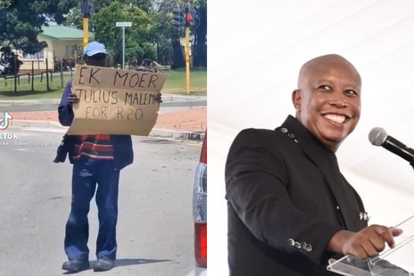 This beggar is trying to cash in on people’s dislike of Malema. Images via Twitter: @julius_sello_malema

This beggar is trying to cash in on people’s dislike of Malema. Images via Twitter: @julius_sello_malema

It is no secret that Julius Malema has gained himself a lot of critics and people who quite frankly don’t like him or agree with his political ideologies. A South African beggar looking to make some cash, decided to use this to his advantage and offered to “moer” the Economic Freedom Fighters (EFF) leader for only R20 – something many locals found absolutely hilarious.

A photo of the man was first shared on TikTok and then reshared on Twitter by Malema himself who appeared to be very nonchalant about the man’s hilarious money-making tactics.

‘Hitman’ offers to ‘moer’ Julius Malema for only R20!

Over the years, we’ve seen people hold up all kinds of signs at the robots to make a quick buck here and there. One of the funniest signs yet shows a man with cardboard that reads:

This is loosely translated to “I’ll hit Julius Malema for R20.”

The post was originally shared by a TikTok user with the handle @nikki_lekker_in_george. On 20 February, it was reshared on Twitter by Malema himself who used a shrugging emoji to relay the message that he could not be bothered with the man and his sign.

Naturally many found the post hilarious and could not refrain from making jokes about it. One user with the Twitter handle, @skinnypants3000 even found another hilarious guy with a sign at the robots that read:

“Will kidnap Malema and torture Jacob Zuma for R20.”

“This is done by a white person, not only ridiculing CIC but also making a mockery of innocent street beggars…It’s sad!”

“This is the entrepreneurial ingenious content I’ve signed up for.”