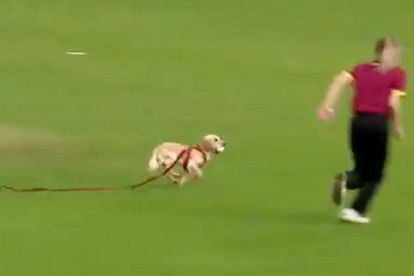 An adorable pup, who was caught stealing a cricket ball during a cricket match, also stole the hearts of many on social media.

Every now and then an animal disrupts some or other big sports match: Sometimes it is a bird stealing a ball during a golf tournament, or Harry the Newlands Hadeda making a ruckus during a cricket match. Now, a dog just seemingly wanted to do what he know best: play ball.

According to Mashable, that exact scene unfolded on Saturday, 11 September during a match-up between the Civil Service North of Ireland (CSNI) Cricket Club and the Bready Cricket Club. The two were facing off in the semi-finals round of the women’s Clear Currency All-Ireland T20 Cup when the now-viral magical moment occurred.

It is believed that the dog escaped from his owner in the crowd and ran onto the field.

“Oh! The dog has the ball!” a commentator says in the video clip before he and his colleague erupt into the laughter.

The dog, who escaped its owner with its leash on, runs across the field as players chase him. A young man who appears to be the dog’s owner springs after the pup, who eventually stops near the wicket.

“I think we’ll retrieve the ball. It may need a clean,” the commentator said further.

The video clocked in millions of views on Twitter alone shortly after.

In August 2021, a bird tried to steal, or maybe eat a golf ball during the final round of the 2021 Women’s British Open at Carnoustie Golf Links. In the instance of this happening, the ball must be “replaced on its original spot (which if not known must be estimated)” whenever it’s moved by an outside influence, under USGA rules.

Luckily, according to Golf Magic, Sweden’s Madelene Sagström went on to par the opener en route to a solid round of 3-under 68 after the bird stole her ball.

ALSO READ: Walrus ‘belly-flops’ its way onto a boat and breaks the internet [watch]