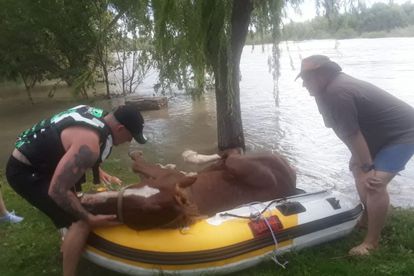 It took five days to save a horse stranded on an island in the Vaal River in the Northern Cape. Image: 9th Day Animal Rescue Centre

It took five days to save a horse stranded on an island in the Vaal River in the Northern Cape. Image: 9th Day Animal Rescue Centre

Rescuers from the 9th Day Animal Rescue Centre has been lauded after spending five days rescuing a horse from an island in the Vaal River, near Barkly West in the Northern Cape, just 24 hours before the tiny island may have been washed away.

A Facebook post from 1 January 2022 with the headline “not all heroes wear capes, some of them wear tattoos” details the rescue mission.

Charmaine Booysen from the rescue centre writes that the horse was stranded on the island from 31 December 2021.

“That is five days and four nights…that we know of.”

The rescue team reportedly had a range of issues they had to consider such as the horse not only drowning or being swept away with the current, but breaking legs due to the diverse levels of the sandbank.

Or “do you sedate the horse and try and lift 300kg+ dead weight onto a boat and try and get him across the river? Knowing that should anything happen and the boat tips, it is a life lost.”

Executing the plan to save the horse

A man named Paolo Selicati was later certain that his plan will work.

“The plan was to sedate him, load him on the tube/rubber boat, get him to the other side and viola, bob’s your uncle.”

While executing the plan, the group almost thought that they lost the horse for a moment when two rescuers fell off the boat.

“Before they went in, Paolo requested the team that should anything go wrong and they end up in the river, they must not panic, he assured them he WILL come and get them. This is exactly what happened. As soon as the horse was safely on the shore, Paolo immediately went back for his fellow rescuers.”

Dr Johan Kriek immediately gave the horse what he needed to reverse the sedation and obviously something to help with the shock.

In good spirits and a whole lot of thanks

After the rescue, it was unanimously decided that the stallion will be named after Paolo.

“Paolo, the horse, seems to be in good spirit and eating well. He is at a place of safety and being closely monitored.”

The 9th Day Animal Rescue Centre also thanked a group of people on the Facebook post, with a special mention to Paolo.

“Paolo, to you the plan was foolproof, others had their doubts, but you KNEW it will work, thank you for your commitment and determination. This could have ended very differently if you didn’t set up.”