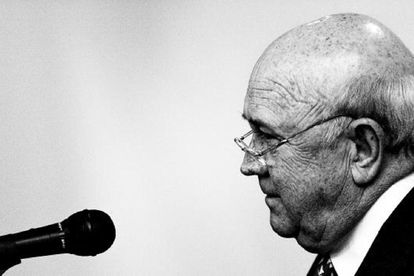 After it was confirmed that the former South African president FW de Klerk has died, The South African looks back on some of the 85-year-old’s most memorable quotes:

De Klerk was the South African president who ended apartheid and played a critical role in the transition period as the country embraced democracy.

De Klerk eventually shared the Nobel Peace Prize in 1993 with Nelson Mandela “for their work for the peaceful termination of the apartheid regime, and for laying the foundations for a new democratic SA”.

De Klerk later said that it was an honour to work with Nelson Mandela:

“When I first met Mandela, we did not discuss anything of substance; we just felt each other out. He spent a long time expressing his admiration for the Boer generals and how ingenious they were during the Anglo-Boer war.War.”

“It was an honour for me to have been able to work with Mr Mandela in the process that led to the adoption of the interim constitution and our first democratic elections in April 1994.”

On the end of apartheid:

After the 1994 elections, De Klerk was appointed the second vice-president in President Mandela’s cabinet.

Of the end of apartheid, De Klerk said: “I felt a sense of fulfilment that an action plan, which I’d laid on the table on the 2nd of February 1990, had been fulfilled, had been properly implemented within the time frame which I envisaged.”

“When I talk about the end of apartheid, I prefer not to claim the honour that I have ended it.”

Of a united South Africa, he said:

“I played an integral part in helpings formulating that new vision… that we must abandon apartheid and accept one united South Africa with equal rights for all, with all forms of discrimination to be scrapped from the statute book.”

When PW Botha resigned as leader of the National Party, he was succeeded by De Klerk. Here’s what De Klerk had to say about his predecessor:

“My predecessor, PW Botha, had an inner circle, and I did not like it. I preferred decisions to evolve out of cabinet discussions. That way, we achieved real co-ownership of our policies.”

On the Truth and Reconciliation Commission:

In 1996, De Klerk, together with other National Party members, withdrew from their cabinet posts in order to establish the National Party as an effective opposition to the ANC. In 1997, he retired from politics.

He also went on to testify at the Truth and Reconciliation Commission (TRC) on behalf of the National Party in August 1996 and May 1997.

“I have made the most profound apology in front of the Truth Commission and on other occasions about the injustices which were wrought by apartheid.”

On the future, De Klerk was quoted saying: “Above all, we owe it to the children of the world to stop the conflicts and to create new horizons for them.”