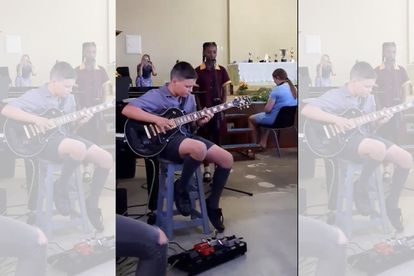 A group of kids from the Free State went viral for their rendition of the American singer-songwriter, Johnny Cash’s ‘Folsom Prison Blues’. Image: Facebook/Trompsburg Primêre Skool

A group of kids from the Free State went viral for their rendition of the American singer-songwriter, Johnny Cash’s ‘Folsom Prison Blues’. Image: Facebook/Trompsburg Primêre Skool

After a piano prodigy went viral for his impromptu performance at a mall, a group of kids from the Free State went viral for their rendition of the American singer-songwriter, Johnny Cash’s Folsom Prison Blues.

According to Good Things Guy, a group of kids performed the song which Cash first recorded in 1955 for his debut studio album Johnny Cash with His Hot and Blue Guitar! at their year-end school show…and South Africans can not get enough!

It is reported that the kids hail from Trompsburg – a town 120 km southwest of Bloemfontein and 56 km northeast of Philippolis.

The video shared to Facebook by the Trompsburg Primêre Skool on 13 November 2021 already clockedion over 300 000 views with over 600 comments… all positive:

“Johnny Cash would have been proud,” said one Facebook user in the comment section. “I could listen to this for ages…That girl should go to South Africas got talent,” said another.

“Can’t stop watching this video! You guys ROCK! KEEP IT UP,” other comments continue to read. “Wow. Beautiful. Love the boeremusiek twist. Lovely voice. Johnny Cash is smiling watching this.”

You can watch the video down below: What do you think?

To compare, here is Cash’s version for which he won the Grammy Award for Best Country Vocal Performance at the 11th Annual Grammy Awards in 1969.

Cash was inspired to write this song after seeing the movie Inside the Walls of Folsom Prison (1951) while serving in West Germany in the United States Air Force at Landsberg, Bavaria.

Cash recounted how he came up with the line “but I shot a man in Reno, just to watch him die” after sitting down “with my pen in my hand, trying to think up the worst reason a person could have for killing another person, and that’s what came to mind”.