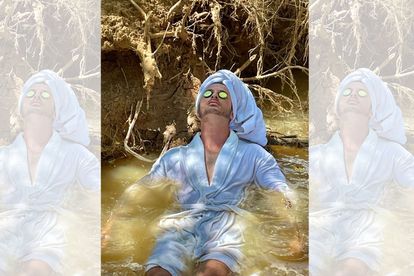 After a Fourways resident went viral for taking his vacation in a sinkhole/pothole outside of his house at the end of 2020, the resident has returned to celebrate the new year with his day spa in a sinkhole.

The South African previously reported that the sinkhole was later referred to as the “Fourways Beach” by the media and residents alike. At the time, the resident, only known as the “Sinkhole Teacher” provided some relief with his pink flamingo and his tub of HTH.

“The idea is really to make light and fun of a dire situation,” he said, as reported by Good Things Guy at the time. The idea is to “bring the spotlight onto Joburg’s failing infrastructure that is as old as 40 years and hasn’t been maintained properly in over 20 years old.”

The publication now reports that the “Sinkhole Teacher” has some advice for the new year.

“I think the only way we can enter the unknown abyss that 2022 holds for us is with courage, hope and getting vaccinated,” he explained.

As for the day spa…

“A spa day is also a great way to reflect on the last year while focusing on what you want to achieve in 2022. And the new Fourways Sinkhole Spa is where you will find the inner courage to soldier on and push through into the new year. I believe there is light at the end of the tunnel.

“We can already see that the new Omicron variant is less severe than previous variants, and we can only hope this is a sign of the COVID-19 virus is slowly weakening and eventually dissipating into a regular flu virus.”

He also opened up about the infrastructure of Johannesburg, saying that it has suffered years of neglect.

“Fourways, along with the rest of Joburg, has suffered years of neglect, deteriorating infrastructure, mismanagement and political corruption. One looks around the city in total dismay, wondering where our rates and taxes go.”

However, the “Sinkhole Teacher” says that he is still hopeful.

“I feel hopeful that incompetence, corrupt tenders and deteriorating infrastructure is 2021’s problem. I believe that 2022 is the year for Joburg!

2022 is the year for Johannesburg

He believes that with a new coalition government running Joburg, you can already slowly see things changing.

“Repairs are happening, proper structures and systems have been put into place, and we hope that the municipal government will be able to turn Joburg around into a world-class city that her citizens deserve in the next five years – improving infrastructure, creating employment and cleaning up the mess left from the past.

“Watch this space. 2022 is the year for Johannesburg. Thank you Herman Mashaba, Mpho Phalatse and all the parties involved; you definitely have to work cut out for you. We will be watching closely.”