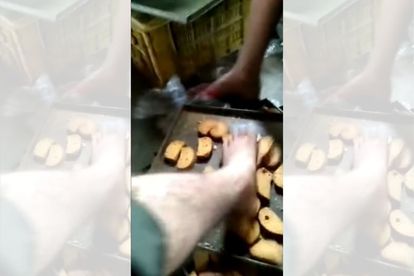 While rusks are a favourite among South Africans, disturbing footage from an unknown location sees factory workers seemingly lick and put their feet on baked rusks that are about to be packaged and sold to consumers.

Factory workers lick, put feet on rusks before packing them

The video shows several factory workers sitting together and packing baked rusks. Two of them are purposely walking barefoot on the rusks on the floor, which are kept in a tray.

The rusks are also licked before they are placed on the packaging cover. It is not clear where the video originated from when it was uploaded to Instagram, but, many social media users are in agreement that the ordeal is “just wrong”.

Ever since it was uploaded on 16 September, the video has clocked in more than 75 000 views.

“That’s it for today,” said one social media user in the comment section. “That’s why one should not take transparent packing goods,” said another.

Shivkumar Parthasarathy from India also shared the video saying that ”these people will ruin the efforts of thousands of bakery workers. Share this video so much that it should reach the police of the state where they belong. Tracking them down is not going to be difficult at all. Just forward and share so it reaches the authorities and these uncouth loafers are booked.”

According to IOL, this is not the first time something like this has happened.

Twitter users were left shocked by a video of a man spitting on tandoori rotis before putting them in a tandoor in March 2021.

The video was taken at a wedding in India which led to people tagging the police, urging them to take strict action against the man, on account of defying basic hygiene protocols, especially during COVID-19 times.

According to reports, the video was secretly recorded by one of the guests at the wedding who caught the cook spitting on the rotis.