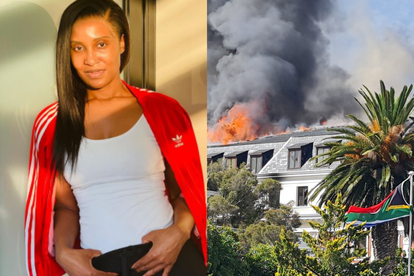 It’s a new year and many people are starting things off on a clean slate. One person who is still up to old tricks and tweeting habits is the daughter of former president Jacob Zuma, Duduzile “Dudu” Zuma. She has once again been slammed by local Twitter users after she shared her thoughts on the recent fires at the Parliament building in Cape Town.

Early on Sunday morning, a raging fire broke out at the parliament precinct resulting in massive damage to the National Assembly Charter and parts of the Old Assembly building.

A few days later, a homeless man name Zandile Mafe was apprehended and charged with arson.

Details surrounding the fire have been quite unclear – especially after experts ruled that explosives may have been used to start the huge fire. Many questions were raised around how a homeless person may have got his hands on explosives.

One of the people who are questioning the sudden fire is Duduzile “Dudu” Zuma.

Taking to her Twitter page on 2 January 2022, Dudu basically said that it was too much of a coincidence that the fire started right before the African Transformation Movement (ATM) planned to file a vote of no confidence in the country’s current president, Cyril Ramaphosa.

She also said that the fire comes as a sign the Parliament should move from Cape Town – “the place where settlers arrived and started problems” – to Pretoria.

“There Is No Such Thing As A Coincidence! Could This Because Of The Upcoming Vote Of No Confidence Brought By
@ATMovement_SA?This Is A Sign To Move Parliament To PTA.Why Must Our Parliament Be In A Province Where The Settlers Arrived&Started Our Problems?Those Statues Must Also Fall,” she wrote.

The tweet did not sit well with many Twitter users who questioned Dudu’s intelligence and reasoning capacity. As usual, there were a lot of Zuma supporters who fully agreed with her sentiments:

“Your statement doesn’t make a lot of sense to me at all. Do you mean the fire was started so that the Parliament can be moved to Pta or was started to avoid a Vote of no confidence by ATM?”

“I had to read thrice to try and make sense of what is being implied here as well. Crazy, crazy stuff indeed. It’s a Grade 1 mentality and reasoning capacity.”

@Shabisto12 agrees with Dudu and said:

“It’s not a coincidence indeed, it’s a well-coordinated insurrection that started in July.”

Dudu Zuma made her stance on the matter very clear when she endorsed a tweet about former public protector Thuli Madonsela being a hater of black people.

This was after Madonsela tweeted that very powerful forces had hired a lawyer for Zandile Mafe. Witness News reports that Mafe is being represented by top South African lawyer, Luvuyo Godla – a representation that a homeless man cannot afford for obvious reasons.

Zuma also thanked those who started the fire shortly after the news broke with a tweet that read, “Cape Town we see you.” This tweet, like many of her former tweets, was heavily frowned upon by local Twitter users.