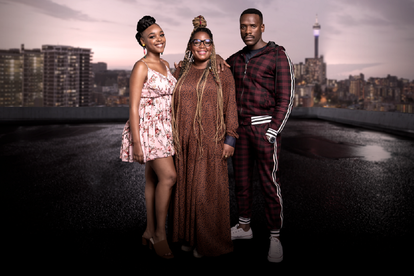 The Johannesburg Review of Books calls Dudu Busani-Dube “a publishing phenomenon”. She’s become the face of self-publishing in South Africa, having topped the Exclusive Books charts, and landed four books simultaneously in the Nielsen Bookscan SA bestseller list for July 2021.

And that was before Showmax announced they were adapting the series of books that made her name – Hlomu the Wife, Zandile the Resolute and Naledi His Love – into their first Showmax Original telenovela, unleashing the most heated casting debate South Africa has ever seen.

Hlomu and the Zulu brothers

As IOL’s Buhle Mbonambi put it, “No other South African series had garnered that much attention on who was cast in the roles before. In my years of reporting about the South African TV industry, I had never come across such heated debate. Even when Deon Meyer’s Trackers book was adapted for screen by M-Net, there wasn’t this much attention paid to the casting choices. But then there have been few characters as fascinating or as gripping as Hlomu and the Zulu brothers.”

As Showmax releases the trailer for The Wife, Dudu shared her take on the casting, her “hardcore” fans, why the telenovela adaptation is “the biggest thing that has happened” to her, and what she’s most excited to see on Thursday.

What inspired the books?

I get that question a lot. There is never really a proper answer, but I draw inspiration from a lot of things that I’ve seen and experienced and people that I’ve met and have lived life with. My books are very much about black people. They’re about a black family, black business, black love and all of that. When they read the books, I think everybody finds themselves or somebody they knew or something that they have gone through in their lives.

What was it like knowing that the book was going to come to life as a series?

Obviously, we had been talking for a while with Showmax, so I had known about this whole big thing coming for a while. But then we had to make the announcement and it went crazy. And it’s still overwhelming. Although I’ve been in this business of writing books for the past seven years, this is the biggest thing that has ever happened to me.

What involvement do you have in the production of The Wife?

I’m not actually very much involved, except that, you know, I created the story.

I did attend the auditions. I’ve been on set a few times and I’ve seen who everybody is. And I think that everybody in this production is very talented, especially the cast.

But I’m not a filmmaker; I’m a books person. So I don’t know much about what happens. In just a little time that I got myself involved, where I have been coming to set, I found that the work is really technical.

How is The Wife going to be different from the books?

It’s going to be very different. When somebody reads a book, it’s going to be their imagination. But when it comes to something visual, it’s actually not easy to adapt it as it is.

This is a telenovela that is inspired by the books, so it changes. It changes a lot.

So look, ja, it’s going to be different, but people are going to love it. As long as the actors deliver, people will eventually accept that ‘okay, so this is the story that we know, but these are the new things that came out of it.’

I’m just a book person; that’s what I do. So I’m just going to let the film people do what they do. I’m excited to see how it goes, how they do it. I’m trusting the process.

The cast for The Wife announcement had a huge reaction. Talk us through that.

But once it was, I felt very, very free and relieved. The reaction, obviously, was great. A whole lot of people love what they saw. But obviously, there’s always going to be people who say, ‘Ei, no, we don’t like. We wanted eight identical men with bug eyes, which is what is in the book.’

But it was impossible. I didn’t think anybody would actually think that we would get eight identical men who have the same big eyes. That is something you could do with the book, but you can’t do that with film.

I personally am happy with the cast. I have met them. They are very talented.

What I like the most is that, in the days that I spent with them, we developed a connection. You know, they sound and they look like friends; they even hang out and laugh together a lot. And that is what the characters in my book are about, the Zulu brothers, they’re about brotherhood. They’re about, you know, the typical boy thing: they tease each other, they laugh together, they protect each other. They are a bit dangerous, of course, but they are a family. So I felt that with the cast and I was very happy with that.

And the lead, Mqhele, everybody loves him. He fits the description. He has the face. He understands the character. So, yeah, I’m happy. I’m relieved.

Everyone has a favourite Zulu wife. Which one is yours?

Oh, I get that a lot. I can’t go there. I have different relationships with all of them but I can’t say who is my favourite.

Hlomu was the start of everything. I had to create her from no story at all, so I do feel like I did bring in a lot of me in her, even though we are totally different people. Like her, I’m also a journalist by profession, so I’m very connected to her. I know her very, very well.

With Zandile, it was a very hard book. It’s a heavy story and I was trying to write from the perspective of an older woman. So that was a different experience for me, and I had to go into a lot of hard things like describing rape. She was also just generally cold, because she had been through a lot. I am not a cold person so that was a different experience about her as well. So I have a very different relationship with her than the relationship I have with Hlomu.

Naledi was a light, loving book about a thick woman, who is who I also am. It was more fun writing it; I enjoyed writing her, although, of course, there were things in there that were, you know, not happy in the story.

And the Zulu brothers?

I’m very much sympathetic to Mqhele but I can’t say he’s my favourite because, you know, he has his own things as well. He is very contradictory. He has a good heart but also he’s a killer and he will kill you. To other people outside, he looks like a scary guy. And then, with Hlomu, he’s kind of a joker. So you get the hard, dangerous side of him with other people and then you get that side of him that is just funny and beautiful and lovable when he is with his wife and sometimes with his brothers.

He’s also an abuser. He beats his wife twice in seven years. I don’t know if it’s narcissistic or it’s a psychotic type of abuse, where you hurt someone and then you love them for seven years until they trust you fully and they believe you are never going to do it again, and then you hit them again.

But these are all my people that were from my head. They are like my babies that I created. So I don’t think I have a favourite child. I have about 25 characters now in these books; I can’t choose one. My experiences with them were different.

What’s the deal about the Zulu brothers’ bug eyes?

There had to be something about them, something that distinguishes them. I decided that they would have bug eyes and that they were going to be identical because even their kids look exactly like them. Just, you know, to create people who are very interesting and not exactly normal.

I think also, maybe, I do like men with big eyes. I don’t know. Maybe that had something to do with me.

When they switch to being the dark gangsters that they are, the bug eyes come in, because, you know, you see it in their eyes that, ‘Okay, it’s bad, now.’

I didn’t say they were beautiful. I just described them as people with bug eyes. Everybody just thought, ‘Oh my God, these guys are so dreamy in the books.’

But this is what has gotten me into trouble with some people, that I could not get them bug-eyed men…

If you know the taxi space, the tracksuit is just one of the things that they wear. So in the book, Mqhele was wearing only tracksuits.

Hlomu, because she’s a little bit snobbish, was like, ‘Why is this guy always wearing tracksuits? Why is he always in taxi rank couture? Why? Why is he like that?’

She used to complain about it. Somewhere in the story, she mentions it, like, ‘Why are you always wearing tracksuits?’ And he says, ‘Because they have, um, you know, they have this elastic here… So you can cover the gun. You can put the gun on your ankle and nobody would know it.’

And she gets shocked that this is the reason but also he just loves the tracksuits.

Which scenes are you most excited to see?

I haven’t watched what has been shot so far, the final product.

But there is a scene, which I was present on set for, where they go back to the village where their parents were killed. They have to meet with the chief, because they need to come back for the traditional wedding. So they have to go back and they have to apologise on behalf of their father. And the chief is shocked that they have the audacity to come back here, knowing who their father was and what he did. So I’m actually looking forward to that part where they go back to a place where they had to run from while their parents were being burned to ashes.

And also just the love between the two main characters, Mqhele and Hlomu. Yeah, that’s another thing that I’m interested in just watching on screen in The Wife.

Binge the first three episodes of The Wife from 11 November 2021, with three new episodes added every Thursday. You can watch the trailer for The Wife down here: