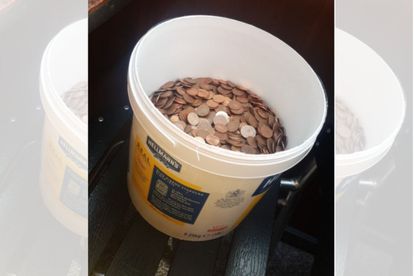 Leaving your place of work can be quite stressful, especially if you have to ask for your final pay cheque over and over again. For this man, it proved to be extra difficult after receiving his final pay cheque in the form of a giant bucket of copper 5c coins.

According to IOL, a restaurant worker in Dublin has claimed he got his final pay in 5c coins, saying he was handed a “bucket of 5c coins” after repeatedly asking for the money.

Rian Keogh shared a photo on Twitter of an industrial-sized empty mayonnaise tub, which had been filled with coins.

“If anyone wants to know what it was like to work in Alfie’s on South William Street just know after chasing my last pay for weeks I finally got it but in a bucket of 5c coins,” he wrote on the post that has since gone viral.

Keogh also shared his conversation with the owner of the restaurant.

The restaurant owner said that even though Keogh had received the payslip, he wanted to pay him in cash and not through bank transfer.

In another text, he wrote that the money was at the door of the restaurant, and Keogh should come and pick it up.

Keogh later also posted a shot of the bucket, which weighed 29.8kg.

Some social media users are seeing the humour of the whole situation, while others think it is quite “disgusting”.

“It’s the fact they would have to deliberately put a lot of effort into doing this that I find the most disgusting,” said one Twitter user on the post that has over 15 000 likes.

“I’ve been screwed over by many an employer over the years, not as insultingly as this, so you’ve my sympathies. I’ve never gone in there and Im not inclined to after your post.”

Others mean this is exactly why people do not want to work in hospitality:

“And the world wonders why there’s a shortage of hospitality staff…?”