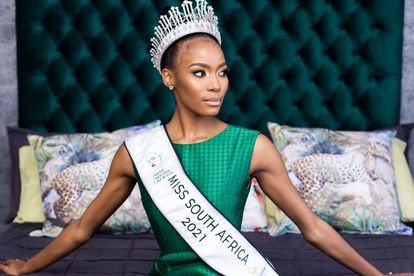 Celebrities have added their voice to the backlash against Miss SA Lalela Mswane attending the Miss Universe pageant in Israel, following the beauty pageant’s organisers putting out a statement earlier this week regarding the winner.

The beauty queen, as well as the pageant organisers, have been criticised for announcing that they will “go ahead” with attending the international pageant despite calls from the public to boycott the “apartheid state of Israel”.

CELEBS SPEAK OUT ABOUT MISS SA

Entertainment blogger Phil Mpela spoke out against the Miss SA pageant, claiming it should “be packed in”.

He tweeted: “Maybe the writing is on the wall…Miss South Africa has run its course and should just be packed in.

“Beauty pageants don’t hold the prestige they used to, which is why controversy seems to be the only thing keeping Miss SA in conversation beyond pageant night.”

Lesego Thlabi — known for her comedy persona Coconut Kelz — called out pageant organisers for being “hypocritical”.

She tweeted: “In the same breath that @Official_MissSA wants to denounce politics, they bring up black women’s hair which is EXTREMELY political. The hypocrisy my lord.

“Also remember when black women had to have their own pageant because… politics? Lol”.

“Not them bringing up another black winner to show that they can’t possibly be problematic. Poor Zozi is just sitting there eating her food and suddenly being invoked as the black ghost of Miss SA past.”

Speaking to Radio 702, Miss SA CEO Stephanie Weil claimed that Lalela Mswane was “not contractually obliged” to attend the pageant in Eliat, Israel next month.

She said: “Her contract states that she does not need to go to Miss Universe, but more than that the issue is whether she wants to go.

“This was not a decision taken lightly, it was after much consultation with both her and myself and the Miss Universe organisation ….and the truth is that she does want to go and represent her country. And she wants to have the opportunity as a woman to consult with 70 other women going to represent their country to look at how to engage and bring about real change where she can.

“Looking at a boycott, I don’t believe that change is going to be substantially made versus being there and being able to engage and really figuring out how to use her voice.”

‘BOYCOTTING MISS UNIVERSE IS NOT THE WAY’

Stephanie added that she was “not here to comment on the politics”.

She continued: “It’s a contentious issue with many varying opinions.  We’re not taking any opinions for granted, we’re here to represent our country and bring the thoughts on our country to an international platform

“Boycotting is not necessarily going to be the way or make a substantial difference …One person is not going to make a change, 70 other countries are attending this event. If she isn’t there, she doesn’t have a voice. She rather be there and bring about change

“She has her own views, her very own strong voice and she wants to be able to use it.”