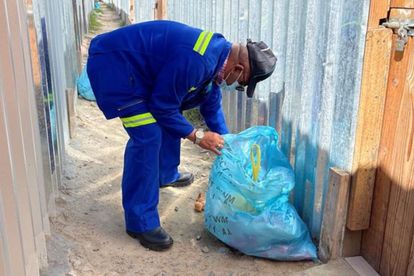 The City of Cape Town has warned residents against buying and selling blue City-branded refuse bags. Image via Twitter @allcapetown

The City of Cape Town has warned residents against buying and selling blue City-branded refuse bags. Image via Twitter @allcapetown

The City of Cape Town has warned residents against purchasing blue refuse bags that are marked as city property. In a statement released on Sunday 22 May, the city added that anyone found in possession of these bags could be criminally charged and prosecuted.

“The City has added a penalty clause to the tenders for cleansing, which penalises the contractor financially for every stolen bag recovered that was originally issued to them,” said Alderman Grant Twigg, the City’s mayoral committee member for Urban Waste Management.

“Reference numbers printed on the bag allow the City to identify which contractor is responsible,” added Twigg.

If residents are found in possession of the blue refuse bags, they could face a hefty fine of R5 000 or prosecution.

“Corruption and theft is a phenomenon that must be stopped. We are obligated to prevent this so that ratepayers and residents can receive the highest quality services possible.”

“The theft of these bags means that they are being resold which in turn has a knock-on effect on service delivery. Reporting the sale of these blue bags will help the City address the problem as quickly as possible,” said Twigg.

Residents are also requested not to dump their waste in canals, parks or open spaces as it is a health hazard.