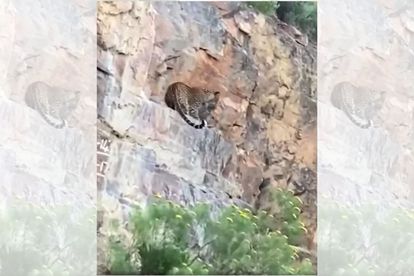 Agri Wes-Kaap shared a video taken of a Cape leopard carrying her cub on the cliffs above a busy highway near Tulbagh. Image: Agri Wes-Kaap/Facebook

Agri Wes-Kaap shared a video taken of a Cape leopard carrying her cub on the cliffs above a busy highway near Tulbagh. Image: Agri Wes-Kaap/Facebook

In a video that has been viewed more than 200 000 times, a Cape leopard can be seen carrying her cub on the cliffs above a busy highway near Tulbagh, in the Winelands of the Western Cape.

Cape Leopard and her cub spotted on Nuwekloof Pass near Tulbagh

According to Cape Talk, Agri Wes-Kaap posted this video on Facebook earlier in November 2021, and people are amazed to see these wonderful animals.

The stuff of legends

It is said that the Cape leopard is “the stuff of legends”.

Africa Geographic reports that the Cape leopard is seldom seen, and survives in some of the most inhospitable habitats possible namely the rugged, low nutritional fynbos biome of the Cape Fold Mountain ranges.

That is what makes this sighting so exciting.

What’s more, females give birth to two to three cubs in a litter, but conditions are very harsh in the Cape mountains, and there is a high mortality rate in the first six months of a cub’s life.

Even though leopards in Africa are classified as “vulnerable”, these leopards are more threatened than other leopards because of urbanisation and limited suitable habitat.

About the Cape leopard

“A Cape leopard sighting is normally only very brief – the leopard will appear as if from nowhere, stand still for a few seconds, and then disappear into the fynbos once more,” the publication writes.

“There are no reports of unprovoked attacks on people in the Western Cape. However, if one were to corner these leopards, or threaten a female’s cubs, they could be extremely dangerous”.

While there is no definitive answer, data from recent studies in three distinct mountain areas suggest that there are fewer than 1 000 Cape leopards living in the mountain ranges.