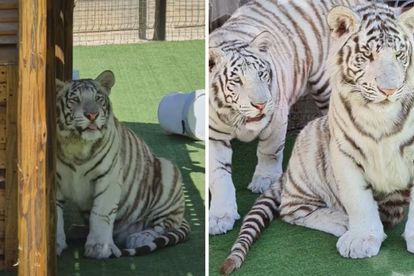 It is believed that there are around 1 500 tigers in captivity in South Africa – even after documentaries such as Tiger King exposed the dangers and dark side of big cat “sanctuaries” and keeping them as pets.

As of recently, it was revealed that a South African couple are keeping tigers as “pets” in Boksburg behind a nursery school (with a TikTok account dedicated to these two tigers to boot). In light of the reports, the SPCA said it was involved with the welfare of the tiger (when it was believed there’s only one) even though it required assistance from the City of Ekurhuleni with regard to enforcing by-laws.

“No exotic or wild animal should be kept by humans as a ‘pet’. This can only end badly, and this poor animal will be the one to suffer because of ignorant humans.”

But, a little more than a year after Netflix’s Tiger King and Joe Exotic made headlines, what has actually changed for captive lions, tigers, and cheetahs? Terry Mukera asked this particular question in an article for the African Wildlife Foundation, saying that there are as many as 10 000 privately held captive tigers in the United States as compared to fewer than 4 000 tigers in the wild. China also has as many as 5 000 captive tigers and in some cases lions too.

Since making headlines, the couple who are keeping these tigers as pets, Matthew and Anneline Kruger — through their lawyers — told News24 that “no laws have been broken and the family has complied with all regulations in Gauteng to keep the animals on their premises”. The National Council of SPCAs (NSPCA) later confirmed that their hands were tied after conducting an inspection and issuing a warning.

Permits pertaining to the ownership of wild animals is handled by Nature Conservation (a division of the Gauteng department of agriculture and rural development).

‘No protection under SA law’

“The images are appalling, but we are not shocked by them,” said Four Paws director Fiona Miles. “Tigers have very little protection under SA law, despite being considered an endangered species. This is particularly true in Gauteng, where such cases of private keeping are prevalent.”

Miles said that the department of forestry, fisheries and the environment announced earlier this year that it plans to outlaw captive lion breeding, keeping lions in captivity and stopping the commercial use of lions or their derivatives, but tigers are not included in this draft plan.

“Many tigers are kept in suburban homes for reasons such as social media exposure. Despite being hand-reared and appearing playful, the cats are wild animals, sentient predators and keeping them in these conditions is hugely exploitative. Exercise and socialisation with other individuals of their species are not available to them, and there is the risk they could pose a danger to others unless adequate safety measures are taken,” Four Paws said.

Miles called on the government to include all big cats in the legislation and appealed for action urgently to complete the process to bring new laws into effect.

Bringing the captive breeding of big cats to an end

“This case highlights why we need to bring the captive breeding of big cats to an end,” said Miles.

Mukera reiterated this fact by saying that big cats kept as pets in private homes do not adjust well to a captive environment, as they require special care, housing, diets, and maintenance that the average person cannot provide.

“When the private exotic animal owner can no longer care for the animal, he or she turns to private zoos and other institutions to accommodate the unwanted pets. Often captive big cats are doomed to live in deplorable conditions and finally be euthanized.”

The NSPCA also said that tigers in residential areas are not a good mix.

“Tigers are exposed to additional and unnatural stressors in terms of noises, smells, dogs, cats, humans and air pollution, to name a few. Initially, these may serve as enrichment to a degree, but thereafter, simply additional negative stress. They belong in the wild. Not only is this extremely unfair and unjust toward the animals, but it is also unethical and a risk to everyone exposed to the animals,” the NSPCA said.

There were also risks to the owners, the organisation said, as these animals could carry pathogens that transmit from animal to human and vice versa. “These include ringworm, herpes, rabies and other parasitic and bacterial infections.

“How the department of health can allow this is beyond understanding, and when it comes to the inherent danger of attack by a tiger on a human it is beyond comprehension the municipality allows such keeping of tigers,” the NSPCA said.