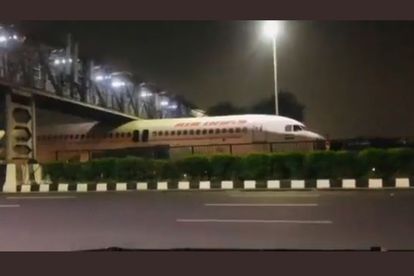 An airplane gets stuck under a bridge in India. Image via screenshot from Twitter @ashoke_raj.

An airplane gets stuck under a bridge in India. Image via screenshot from Twitter @ashoke_raj.

A video of an Air India plane stuck under a bridge while traffic streams past in Delhi has gone viral on Twitter since being shared on the platform on Sunday 3 October.

WHY IS THERE A PLANE WEDGED UNDER A BRIDGE?

It’s actually not what it looks like, the pilot was not flying the plane as low as it could go. The Air India plane is actually a scrapped plane which has reportedly been sold off. The plane was being transported when it got stuck. The wings of the plane have actually been removed as well.

The video was tweeted by a journalist named Ashoke Raj who often writes about aviation. The journalist asked his followers if they knew the date and location of the video.

The video was taken over the past weekend at the Delhi-Gurugram highway.

WATCH AS AIRPLANE GETS STUCK UNDER BRIDGE

“#WATCH An @airindiain plane (not in service) got stuck under foot over bridge. Can anyone confirm the date and location? The competition starts now,” the tweet was captioned.

The journalist shared a statement from Air India which said that Air India has no connection with this plane as it has been sold.

“This is a deregistered scrapped aircraft of Air India which has been sold off. This was transported last night by the party. Air India has got no connection whatsoever with the aircraft under any circumstances: @airindiain,” read the statement.

The Delhi airport said that the the aircraft does not belong to them and the driver had made an error while transporting it.

“The aircraft certainly does not belong to the Delhi airport’s fleet and in the video it is being transported without any wings. It appears to be a scrapped plane and the driver may have made a judgement error while transporting it,” said a Delhi airport official to The Times of India.

A Tweep confirmed that the aircraft has actually been stuck under the bridger for a few days now. Tweeps claim that the airplane had been stuck there between the night of Saturday 2 October and the early hours of the morning on Sunday 3 October.

The journalist posted a full video of how the plane actually got stuck under the bridge as the driver seems to have made bad judgement whilst transporting the plane.