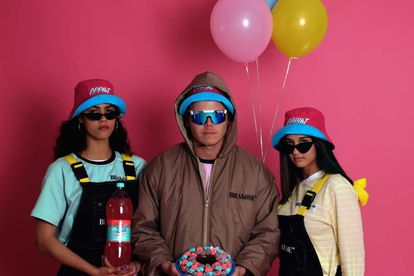 Cape streetwear fashion brand BRAhSSE is aiming to represent the minds and identities of the post-apartheid generation through locally produced clothing and creativity.

The three guys behind it are also hoping to take BRAhSSE to an international trade show in the United States in 2021.

Abdu-Shakoer Baderoen started BRAhSSE while he was a student at Stellenbosch University in 2017 with his best friends Chad Mockey and Ethan Beukes.

The three hope that BRAhSSE will help to build a unified identity among people of different heritages, cultures and backgrounds, and to establish it authentically and fashionably.

Coming from a disadvantaged background, however they did not have the start-up capital so Baderoen’s friend Matt Grobler offered his help and became the main investor.

“I think this gave me the inspiration for a brand where unity in diversity can be celebrated and show the South African youth that it’s our time to heal the rainbow nation and the economy.”

This also links to the lowercase “h” in the name, which stands for heritage.

Baderoen says he uses his heritage and where he comes from to establish something remarkable.

The team held the first pop-up at Metanoia because the location meant a lot to Baderoen.

The pop-up shop was in the room they called the ‘’JOOL room”, a storeroom for props used in the famous Stellenbosch University Welcoming Week.

“I was told numerous times that I must leave my post-studies internships and jobs just to get possible funding assistance by the government.

“But I couldn’t because I’m not in a fortunate position to do this. I am looking after my mother, sister, and my team, as they are still students and must invest in my business.”

What the letters XCV mean

The letters “XCV” are on all their clothing. Baderoen says XCV is their essence and stands for XTRDNARY CLRD VZNS – Extraordinary Coloured Visions.

It is also the numerical code for the number 95. This is an important number to them since they were all born in 1995, which is also the first post-apartheid year in South Africa.

Entertainment is a media start-up business focusing on content such as music and storytelling videos, run by Ziyaad Jeftha.

Smaak Vriet is a brand where Irvin van Rooy shows how to cook local foods and discusses trending topics while doing so.

Jive Cooldrinks recently approached the brand to collaborate on a project for three new sugar-free drinks.

“The next thing I heard my phone ringing from an unknown number. I picked up and the lady introduced herself and asked me to tell her more about the brand,” Baderoen enthused.

“I explained and then the next thing she said was, ‘You just got the first of two collaborations with Jive Cooldrinks’.”

The streetwear trade show Agenda Las Vegas has invited BRAhSSE to attend its show in 2021. Agenda is one of the most diverse and creative lifestyle fashion trade shows in the world, and is held twice a year.

Baderoen said he was busy working on the financials of the brand one evening when the Instagram DM arrived.

When he told his mom about the opportunity, she said, “My kind, maak die beste van dit. Julle moet gaan” (“My child, make the best of it. You have to go”).

A week after the DM invite, the official invite arrived from Agenda Las Vegas.

To showcase at the event will however cost $4 500 (roughly R80 000) and they are busy fundraising to make this happen, as they need to pay half of this before the end of September.

This excludes their travel, accommodation, and administration costs, which they will try and fund themselves.

“We want to go there and do business and bring it back so that we can create employment and opportunity for other businesses here,” said Baderoen.

“We want to show the youth that anything is possible if just go after your dreams and try your utmost best to make things happen.”

Eventually, they would like to open their own store and do pop-up stores all over South Africa.

They would also like to explore other product categories, such as a children’s line. For now, they are going to continue with what they are doing and grow the brand organically.

The next pop-up store is planned for the end of August in Strand, Western Cape, hopefully at the beachfront.