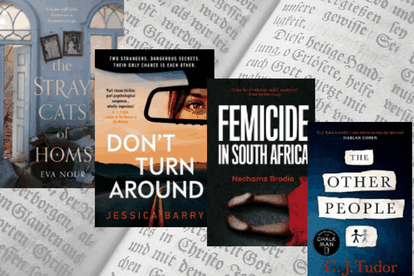 With lockdown having been recently eased, book shops have been slowly reopening. New health and safety regulations have seen them welcoming customers inside once more.

Which means that if you have run out of something to read and are itching to get your hands on something that is not a university textbook, look no further. Here is a list of the latest releases so the next time you are perusing through a bookstore, keep an eye out for these titles.

‘The Stray Cats of Homs’ by Eva Nour

The Stray Cats of Homs is an unforgettable debut novel, inspired by the true story of one boy’s extraordinary life in Syria. It will suit fans of The Kite Runner, The Beekeeper of Aleppo, The Pianist of Yarmouk and The Tattooist of Auschwitz.

Inspired by extraordinary true events, The Stray Cats of Homs is the story of a young man who will do anything to keep the dream of home alive, even in the face of unimaginable devastation. Tender, wild and raw, it is a novel which will stay with you for ever.

Sami’s childhood is much like any other – an innocent blend of family and school, of friends and relations and pets (including stray cats and dogs, and the turtle he keeps on the roof).

However, growing up in one of the largest cities in Syria, a country at war with itself, means that nothing is really normal. And Sami’s hopes for a better future are ripped away when he is conscripted into the military and forced to train as a map maker.

‘Don’t Turn Around’ by Jessica Barry

Two strangers, Cait and Rebecca, are driving across America. Cait’s job is to transport women to safety. Out of respect, she never asks any questions. Like most of the women, Rebecca is trying to escape something.

But what if Rebecca’s secrets put them both in danger? There’s a reason Cait chooses to keep on the road, helping strangers. She has a past of her own, and knows what it’s like to be followed.

And there is someone right behind them, watching their every move …

Why is South Africa’s femicide rate so high? Where did our violence against women start? What steps can we take to start solving these issues?

Nechama Brodie starts answering these questions by documenting and analysing stories in the media about the murders of women in order to compare reporting on femicide with the reality of femicide.

What emerges is a much broader picture of a continuum of violence against women in this country.

‘The Other People’ by CJ Tudor

This is a gripping new thriller about a man’s quest for the daughter no one else believes is still alive. CJ Tudor is the acclaimed author of The Chalk Man, The Taking of Annie Thorne and The Hiding Place.

He never sees her again.

Three years later, Gabe spends his days and nights travelling up and down the motorway, searching for the car that took his daughter, refusing to give up hope even though most people believe that his daughter is dead.

His search leads him to a group called The Other People.

There’s just one problem … they want other people to know it too.