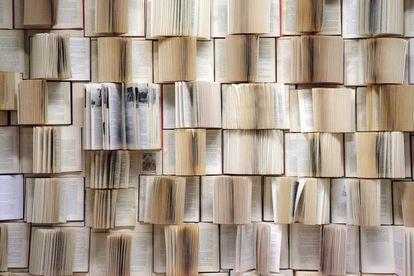 However, his latest novel, The Woman in The Blue Cloak, has one fault. It is too short. It ends abruptly on p141 when there is still quite a lot to be said, I thought. (Maybe he was saving it for his next Griessel novel, Prooi recently published in Afrikaans.)

The Woman in The Blue Cloak was commission for the 2017 Spannende Boekenweek (Week of the Thriller) in the Netherlands as a ‘gift book’ – a freebie given to buyers of crime and suspense novels in the period. It wasn’t meant for the consumer market so it is a bonsella for Meyer fans that it’s come out internationally.

It’s a Benny Griessel story and follows the story of why a woman’s body, naked, washed and bleached, was draped over a wall on picturesque N2 highway over Sir Lowry’s Pass. The investigation that follows, carried out by Griessel and colleague Vaughn Cupido, stretches to the Netherlands, Villiersdorp and England and plunges into the art world of the 17th century.

It’s a clever book, very readable, and with plenty of strands to pull you onwards. With its pleasantly large print and 1 ½ line spacing, it’s a quick read and leaves you wanting more. Meyer hasn’t lost his touch one iota and is still one of the best crime writers on the planet. Roll on the translation of !