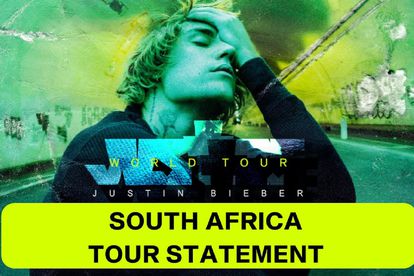 Big Concerts has updated their fans on the news that Justin Bieber has officially canned the remainder of his Justice World Tour over his ongoing health woes.

The singer made the announcement on social media this week, mere weeks ahead of his concerts in South Africa.

The pop singer was billed to perform in Mzansi on Wednesday 28 September at the DHL Stadium in Cape Town. On Saturday 1 October, Justin Bieber was expected to appear at the FNB Stadium in Johannesburg.

With Justin Bieber’s Justice World Tour concerts now cancelled, South African Beliebers are wondering what to do with their tickets.

Show promoters Big Concerts have responded to queries via a statement on their social media platforms.

It read: “We all wish Justin a speedy recovery and admire his decision to put his health first. We can’t wait to see him back on the road and we’re standing by for further updates which we will share with you as the South Africa dates approach.

“If the South African leg of the tour gets cancelled, all ticket holders will receive a full refund”.

In his statement, Justin Bieber alluded to his health battles in recent months. This including his diagnosis of Ramsay Hunt Syndrome in June during which the singer suffered partial face paralysis.

He shared: After resting and consulting with my doctors, family, and team, I went to Europe in an effort to continue with the tour. I performed six live shows but it took a real toll on me.”

He continued: “This past weekend, I performed at Rock in Rio and I gave everything I have to the people in Brazil. After getting off stage, the exhaustion overtook me and I realized that I need to make my health the priority right now.

“So I’m going to take a break from touring for the time being. I’m going to be okay but I need time to rest and get better. I’ve been so proud to bring this show and our message of Justice to the world.”

Following the announcement, Justin Bieber fans around the world have sent their well wishes for the star to make a full recovery.