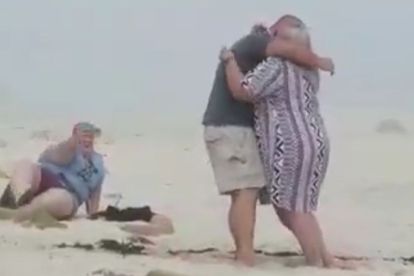 Proposals are tricky – most people hope that meticulous planning will result in flawless execution. Unfortunately, things don’t always go to plan – the worst-case scenario would be rejection, which is not a laughing matter.

On the other hand there may be technical hitches, which happens more and more often in the social media age where recording the proposal is just as important as popping the question itself. Pictures or it didn’t happen, as the saying goes.

Mileage varies and not everyone has a professional photographer or videographer at hand to capture the special moment – sometimes a family member or friend will do. This is exactly the scenario, which led to a hilarious and heart warming video that went viral recently.

Celine Edwards, a local chef from Pretoria, had a front row seat, so to speak, to her sister’s engagement, which was taking place on a blustery day at Kogel Bay Beach in the Western Cape.

In her excitement to capture the wonderful moment on video, she lost her balance after stumbling over a rock. Once she lost her footing, she struggled to regain her balance. Meanwhile, the proposal was still taking place. Edwards’ sister was fighting back tears of joy while she was fighting the force of gravity.

Luckily, for the public and the couple, Edwards’ soon-to-be brother in law’s cousin was also filming the engagement from afar.

The video of the proposal went viral as soon as it hit social media and gave everyone a good belly laugh. It was even picked up by mainstream broadcasters. Eventually, the footage from Celine’s point-of-view also surfaced, which made for an interesting side-by-side comparison.

“I’m not a photographer, I’m actually a chef. It’s my sister and I just wanted to take a video of the engagement. I was so excited and I just fell. Three times,” said Edwards to Jacaranda FM’s Rian van Heerden.