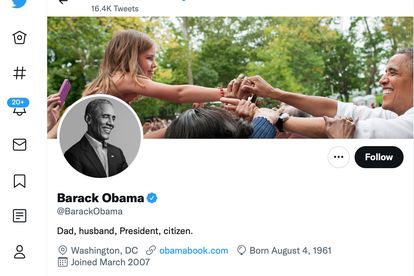 Key figures on the American left, Barack Obama among them, have shed thousands of followers since Elon Musk’s planned purchase of Twitter emerged, while numbers have soared for right-wing politicians.

The news was greeted with enthusiasm by fans of Musk, who calls himself a free speech absolutist, and horror by proponents of strong moderation of disinformation and hate speech.

Promises to leave the platform trended under hashtags such as #LeaveTwitter. Within hours, many appeared to be following through.

Former US president Obama, the most popular person on Twitter with more than 131 million followers, lost 300 000 of them nearly overnight, according to news outlet NBC.

Greene, a vocal ally of former president Donald Trump whose personal profile was banned by the platform, praised the acquisition.

“Prepare for blue check mark full scale meltdown after @elonmusk seals the deal and I should get my personal Twitter account restored,”

she tweeted, referencing the site’s system for verifying users.

“It really is something how conservative accounts are getting massive follower increases today,”

Twitter on Tuesday told AFP that while they were monitoring the situation, the fluctuations appeared to be organic and largely due to new accounts being created and existing ones deactivated.

The exodus extended beyond political accounts.

“It’s strange to see a loss of some 35,000 followers overnight,” the Auschwitz Memorial account posted Tuesday. The profile, which has 1.3 million followers, tweets photos and stories of concentration camp victims.

Musk has said he wants to increase trust in Twitter, which he sees as a digital town square for free speech and debate.

Twitter co-founder Jack Dorsey tweeted Monday that “Elon’s goal of creating a platform that is ‘maximally trusted and broadly inclusive’ is the right one.”

He thanked Musk and Twitter CEO Parag Agrawal “for getting the company out of an impossible situation.

“This is the right path…I believe it with all my heart.”