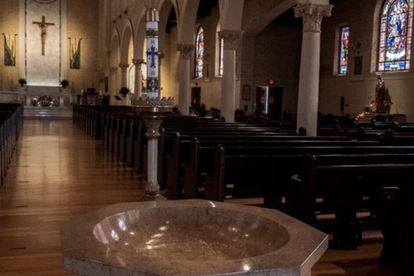 A US catholic priest has been making the same mistake for 26 years with baptism blessings. Image via Twitter @HeyKitty

A US catholic priest has been making the same mistake for 26 years with baptism blessings. Image via Twitter @HeyKitty

Thousands of Catholics in the United States may have to be re-baptized after the church discovered a priest had gotten one word wrong in the blessing for decades – invalidating the rite.

For 26 years, Father Andres Arango had been performing the first sacrament of Catholic life with the words, “We baptize you,” instead of the Vatican-sanctioned “I baptize you.”

ALSO READ: How to cut costs during a renovation

“It is not the community that baptizes a person and incorporates them into the Church of Christ; rather, it is Christ, and Christ alone, who presides at all sacraments; therefore, it is Christ who baptizes,” Thomas J. Olmsted, bishop of Phoenix, said.

Arango’s error was identified in mid-2021, a quarter of a century after he began working as a priest, diocese spokeswoman Katie Burke told AFP on Tuesday.

“Father Arango was using the incorrect words from the beginning of his priesthood until it was brought to the attention of the diocese last summer,” she said.

“I do not have an exact number of people baptized between 1995 and 2021, but I believe they number in the thousands.”

Since the mistake came to light, Arango has quit his regular job “to dedicate his full-time ministry to helping and healing the people who were affected by this mistake,” Burke said.

“The diocese is working closely with Father Arango and the parishes at which he was previously assigned to notify and make arrangements to baptize anyone who may have been baptized invalidly.”

THIS IS NOT THE FIRST PRIEST TO MAKE A BAPTISM ERROR

A website has been set up to answer questions from worried parishioners, including:

“Does this affect my marriage?” and “Do I need to go to confession?”

Baptism in the Catholic church is a rite of admission that church doctrine says is necessary for a believer to access other blessings.

In common with other Christian denominations, it normally involves sprinkling or pouring water on the head, or the supplicant being immersed.

Catholics believe that only people who are baptized can enter heaven after their death.

Arango’s error is not the first; in 2020, a priest in Michigan discovered that he had to be re-baptized after watching a family video in which the officiant also used “we” instead of “I.”