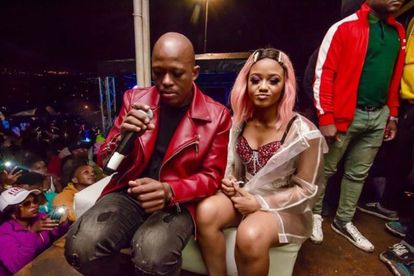 Just when the drama between gqom singer Babes Wodumo, real name Bongekile Simelane, and her partner Wes Ink record label owner, Mandla “Mampintsha” Maphumulo appears to have subsided – the public is yet again reminded of their stormy relationship.

On Thursday 23 January, Moja Love TV channel will broadcast a three-part docu-series, titled Impilo: Mampintsha WesInk, which gives viewers an inside look into the award-winning duo’s daily lives, following their life on the road as they tour across Mzansi and showing the inner workings of their romance.

Uyajola 99 presenter and musician Molemo “Jub Jub” Maarohanye is set to host the show and play mediator between the pair.

Speaking to City Press, Bokani Moyo, channel head at Moja Love, said the show was a first of several docu-series it had planned for 2020 which would cover the lives of local celebrities. Moja Love is popular for its reality shows which tackle controversial societal issues, such as cheating, polygamy, substance addiction and family scandals.

In a clip posted onto Moja Love’s Twitter timeline, Babes, wearing a hat and visibly drunk slaps and pushes Mampintsha while accusing him of cheating on her and taking pictures with his mistresses. Mampintsha denies this and hurls insults at Babes as she continues shouting at him.

The couple trade more insults as the cameras capture the disturbing moment.

On Twitter, the reaction to the show has mainly been negative with it branded as toxic and being a glorification of violence and dysfunctional relationships.

The pair have been involved in an on-and-off relationship for the past five years. The state of their controversial affair has left some baffled as in the past year, Mampintsha was caught physically abusing Babes in a live Instagram video which quickly went viral and resulted in a police case being opened against the former Big Nuz member.

In addition, the 25-year old was also charged with assault by a friend who allegedly leaked footage of her discussing the case with friends before it was heard in court.

Though Babes and Mampintsha have since reconciled and the police charges they faced, dropped – they made headlines in 2020 when an image of her looking slimmer than usual was posted onto social media networks.

Since then, the gqom star has kept a low profile and experienced a slow down in her career as she is rarely booked for gigs and lost out on a lucrative deal with Cell C to promote their mobile packages.