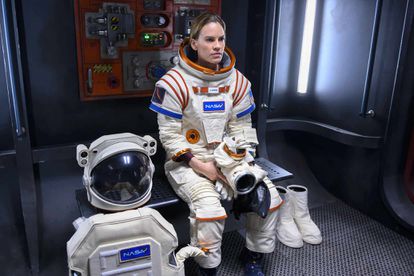 Netflix on Monday released the trailer for Away: a thrilling, emotional drama starring Hilary Swank as Emma Green, the Commander of the first crewed mission to Mars.

Hilary Swank is the recipient of two Oscars and two Golden Globe Awards for her portrayal of Brandon Teena in the 1999 drama film Boys Don’t Cry, and for her performance as Maggie Fitzgerald in Million Dollar Baby five years later.

We spoke to Hilary about her portrayal of Emma Green ahead of Away’s premiere next month. The series is loosely based on Scott Kelly’s life, the first American astronaut to spend a year in space.

In fact, producer Jason Katims began working on the idea for a series after reading Chris Jones’ essay in Esquire about Kelly’s life.

In Away, Hilary juggles fulfilling her dream of leading the first crewed mission to Mars and the toughest decision she ever had to make: leaving behind her husband and daughter when they need her the most.

In conversation with Hilary Swank

I appreciate the fact that Away placed women on the forefront. Most space-related shows and films are still male-centred, even though NASA allowed women in the space program since the seventies.

Away also tackled the challenges that women face in the workplace without being preachy. Hilary agreed with that sentiment and loved that Away took a modern angle and addressed these issues without bringing it to the forefront.

“The husband-and-wife relationship between Emma and Matt is one of support for one another. Their story is not about jealousy; he’s just really supporting her. What we usually see is the reverse: with the wife supporting the husband. I think it’s something that is great about the show.

The show also deals with so many different types of people and it’s breaking down stereotypes of races. It gets to the connective tissue which is the humanness of people; people who have a desire and a dream and who want to see that through.”

Hilary also loves that the commander is a woman. We talked about the challenges that woman astronauts still face today. Even though it’s almost equal, woman astronauts are still asked how would they be able to go to space if they have children.

She points out that it is never asked of their male counterparts and adds that the show deals a blow to those “interesting stereotypes”, such as a child needing their mother more, or that a father won’t miss his children as much.

“There are a lot of woman astronauts and it’s almost to the point where it’s finally 50/50. One of the things asked of a lot of astronauts: ‘How are you going to get to space with children?’ And it never gets asked of their male counterparts. Never. I think that’s interesting, the idea that a child needs their mother more or that a mother is going to miss their child more than a father.

Those stereotypes are interesting to talk about. There are so many things about the show that I love and why I jumped at the opportunity to be a part of it.”

The ‘humanness of space travel’

I also appreciated that Away focused on humanity. I report on space-related topics quite extensively, specifically the race to Mars, and couldn’t help but notice that the focus usually centres around technical aspects.

Very seldom do we discuss how space travel would affect our relationships and our humanity.

“I love that you understood that. First of all, space exploration is something that’s so enticing to so many people, it’s uncharted territory and it’s super cool. But the other facet of the show deals with the challenges you face when you leave what you know and what you love here on Earth”.

She adds that Away is “a great love story in a lot of ways” — a love story about the humans who leave Earth, who leave their families behind. It is also a love story “of the dream of going to Mars, of pursuing their passion”.

Hilary said that even though she was just pretending to be an astronaut on set, she now has a much deeper understanding and appreciation for astronauts, specifically the “intense isolation” that goes with the territory.

“The toll it would take on you emotionally and physically are astronomical, for lack of a better word. Understanding the physical challenges, like being in a spacesuit and going out on a spacewalk, it’s really challenging on your body. The opportunity to talk to a real astronaut who had been through that was such a gift as well”.

She refers to former NASA astronaut Mike Massimino, who acted as a consultant on the series and ensured that Away feels authentic.

The intersection of Emma’s story arch with Misha’s, and how their relationship change throughout the season was one of the highlights of the show as well. So many factors play a part in their complex relationship:

“If you’re going through what could be a life-or-death situation, you have to build trust. You don’t just put your life in anyone’s hands. I think also the difference of backgrounds between those two countries (Emma is American, Misha is Russian) are very, very different.

You have that, on top of gender stuff, on top of the experience stuff, and you see that relationship evolve and grow through challenges and through commonality, and it eventually transcends. Whether you grew up in America or you grew up in Russia, it doesn’t really matter at that point, it becomes the human connectedness. That’s what I love about the show: it transcends so many stereotypes constantly.”

All 10 episodes of Away is scheduled to be released on Friday, 4 September 2020 on Netflix.

Tags:
Away (series)
In conversation with Cheryl Kahla
Netflix
PreviousNext article
Next article