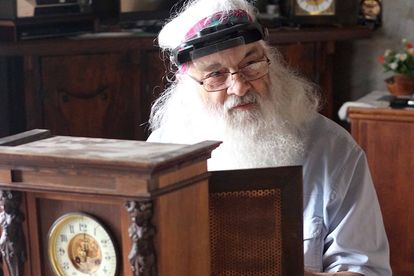 Clock-fixing is a dying art in South Africa

Clock-fixing is a dying art in South Africa

You can’t miss Paul Knoetze’s flowing snow white beard and ample moustache. You also can’t help thinking he would make a very good Father Christmas.
But there are a whole lot of other things that make him truly remarkable. One of them is the ability to get stuff working, when others have tried their hardest and given up. And it’s an art he is desperate to keep alive.

“That’s the challenge I love most” he says. “There’s always a solution. You just have to find it.”

If you had to ask the bearded master craftsman for his favourite repair assignment it would most definitely be to get church clocks up and going again. This achievement is closely followed by the art of fixing antique chiming clocks and old traditional cuckoo clocks.

In many cases the inner mechanisms haven’t worked for years.

He has also created his own clocks, but he admits that is a painstaking art that takes years to perfect.

Knoetze, now nearing 80, lives in the village of Franzkraal, on the route to Cape Agulhas where white pebbles, similar in colour to his beard, have been made glassy smooth by the wild and rocky Indian Ocean coastline and where an old shipwreck is still visible from the beach.

We met at his clock-making and repair table where he is bent over a 100-year-old-clock that hasn’t chimed in 20 years. His magnified eye shield is trained on a tiny and delicate part that controls the clock’s pendulum, which in turn keeps the clock ticking.

“The owner was told it would cost more than R6,000 to repair,” he says looking up from his work. “But that is nonsense. I have taken it apart. It needs cleaning and there’s a small repair to the pivot mechanism that has to be made.”

The real issue about antique clocks, large and small, he explains, is that many of the parts you need have to be crafted by hand.

“Every clock is different. But once you understand the mechanisms and how they should work, it’s just a matter of designing and making the piece you need and then doing what I call ‘precision balancing’ and ‘perfect timing’.”

An electronics engineer by trade, Knoetze has been called in to revive many historic clocks, including more recently the 200-year-old clock at the Genadendal Mission Station in the Western Cape, which had been silent for nearly half a century.

“Again, it meant hand making the parts that were worn and doing the refitting, cleaning and balancing.”

Finding joy in the challenge

His most challenging timepiece was a 19th-century cuckoo clock whose call had long gone.

“There were two cuckoos – one at the top and a baby cuckoo in a nest below. They both had to wake up and sing at the same time. When they eventually did, it was a great moment.”

South Africa is awash with old clocks that look out on tiny village squares and in many cases dominate the city skylines.

“The sadness is that unless we set up special clock-making and clock-repairing schools, like the guild schools of old, many of our treasured clocks will stop working, probably forever. There are only a few people left who can do this work – to me it’s a matter of urgency that we revive and invest in the art of clock repair before it’s too late.”

On the hour, the clock he is repairing starts to chime for the first time in years.

“Lovely sound” he says with a smile. “It’s singing again.”

So too are at least fifty clocks around his house, collected and repaired, “just for the love of clocks.”

Knoetze’s motto is: “If you are going to do something, do it right the first time.”

From the sound of the clocks, he’s got that one, spot on.