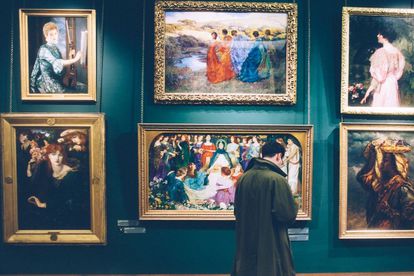 It is speculated that somewhere in Cape Town there is perhaps a ‘bergie’ who has a fondness for art, especially a work named ‘Ophelia’ that was inspired by Impressionist Claude Monet.

The artist Willem Pretorius deeply hopes that this is the case after the work was stolen from his car. Pretorius hopes that the artwork (that is worth nearly R100 000 and is 100cm by 80cm) did not end up as anything more than firewood on a cold evening.

According to IOL, Pretorius said he is not normally a portrait painter, preferring landscapes, but it was one of three paintings he had entered in the bi-annual Portrait Awards.

The portrait is of a friend swimming in their pool at their Rosendal home in the Free State. He was hoping to gift it to her.

’’A reward was offered to ’bergies’ living down the road for any information on who stole the painting, but I have heard nothing further from the people we lived with in Tamboerskloof. Perhaps someone initially thought it was a TV,’’ Pretorius, who has returned to Rosendal, told IOL.

’’I didn’t go to the police station to report the theft because we were in a hurry to leave Cape Town and I wasn’t convinced that it would make a difference.”

He also explained to the publication how the painting was stolen.

“The painting was covered by a piece of canvas and they broke one of the windows of my VW Kombi’s back windows. All the seats had been taken out because I also had a Vespa in the back, which was also covered, and a laptop, both of which weren’t taken. I had walked twice around the car to check if anyone would be able to spot what is in the car.

’’Someone must have thought there is a strange car in the neighbourhood and broke in to see if there was something of value under the piece of canvas. We had no choice but to park in the street and my friend we stayed at had warned that we would have to cover things up to prevent anything from being stolen.’’