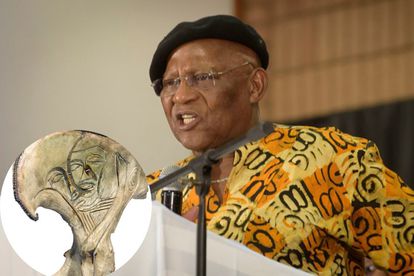 The South African sculptor, poet and writer, Pitika Ntuli recently walked away with the Global Fine Art People’s Choice “You-2″ award in Paris.

It is reported that the Global Fine Art Awards (GFAA) programme announced the winners for its seventh edition – selected from the 116 nominees.

After conducting extensive year-round research of more than 2 000 curated exhibitions and installations across the globe, Ntuli’s Azibuyele Emasisweni (Return to the Source) – an online exhibition of the bone sculptures hosted by the Melrose Gallery – won the “You-2 Award”, one of the two People’s Choice Awards.

According to SowetanLive, Ntuli said he couldn’t believe it when he heard the news.

He thanked all the collaborators, voters, the gallery and his children — and most especially his life partner, his wife, for all the support. He said via text message that his “overarching desire” was that his exhibition would show “we are all interconnected, interrelated and interdependent with each other and nature – a message that first peoples of the world have known since time immemorial.

His hope is for South Africa and African art to become more prominent.

He later thanked everyone for their support on Twitter. “Thanks so much for the overwhelming support during this time. Proud of my people. Their love understanding and ability to rise above mediocrity and embrace creativity!”

Holm recognised the significance of the category in which the exhibition was nominated – Best Digital and Educational Programme. She spoke about the significance of finding new ways of communicating art in the time of COVID-19. She also gave special mention to the underlying spiritual and political meaning of the works.

Each bone sculpture was accompanied by a poem and 33 collaborators including Homi Bhabha, Ngugi Wa’Thiongo and SA’s Minister of International Relations, Naledi Pandor, contributed poems, reflections and theoretical analysis.