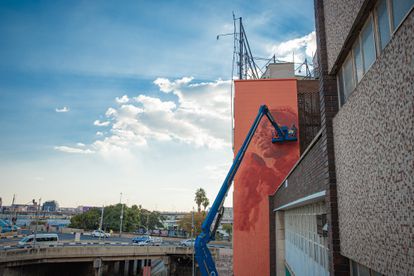 The artwork, that was commissioned by Hennessy, features Nelson Mandela, depicted by international artist Shepard Fairey in 2014 (Braamfontein); Yvonne Chaka Chaka, brought to life by Portuguese street artist Vhils in 2018 (Maboneng); and now, Faith XLVII’s tribute to women, which was unveiled on 22 April on Smit Service Rd in Braamfontein.

The collaboration with Faith XLVII for the design of the tenth annual Hennessy Very Special Limited Edition was announced last year. As the guest artist, Faith XLVII was also the first female voice and first South African to join the Limited Edition series; a lineage that features internationally acclaimed talents such as Felipe Pantone, Vhils, JonOne, Shepard Fairey, Os Gemeos and Futura.

The final piece of the trilogy was unveiled at an exclusive event that saw artists and creatives such as MC Scoop Makhathini, Osmic Menoe and the likes come together to celebrate.

“We are proud to continue our partnership with this global talent. Who better than Faith XLVII- a fellow South African and embodiment of our Never Stop. Never Settle brand philosophy – to complete the Mural Trilogy,” said Khomotso Ledwaba, brand manager for Hennessy SA in a statement.

“As an artist, activist and game-changer in her field, Faith XLVII builds on our longstanding commitment to forging ties with pioneers of urban culture. It has been a privilege to work with her and to reflect on the artistic synergies between both herself as an artist and us as a brand. It’s an important moment for us in our ongoing effort to partner with artists who are part of a global movement.”

In the final instalment of the trilogy, they continued to explore the alchemy of the artistic process to pay tribute to powerful South African icons.

“Following the themes of the Shepard and Vhils murals, who both celebrated iconic South African figures, Mandela and Yvonne Chaka Chaka, I decided to honour the women of Johannesburg,” said Faith XLVII.

“I generally don’t project into how an audience should interpret a work, but I am hoping the final mural conveys the vibrance and electricity of Johannesburg, a city I have loved since childhood. This while paying tribute to the powerful women who shape the city’s culture,” she concluded.