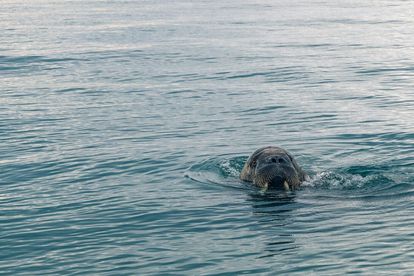 What does an Irishman imitating a walrus, two ginger-haired kids and an exasperated mum have in common?

A viral video of an Arctic walrus coming ashore, that’s what.

If you haven’t seen it yet, the recent footage recorded by RTÉ News shows a walrus on Valentia Island just off the west coast. The exhausted traveller, which apparently arrived all the way from Greenland, can be seen flopped over a few rocks, looking how most of us feel after a long day’s work: Hungry, exhausted…and over it.

With the last sightings of an Arctic walrus in the county tracing back to 1999, the locals have been left perplexed at the sudden arrival.  The event has caused quite a fuss among the local residents on the island who came out in their droves to catch a glimpse of the animal and provide some highly entertaining responses.

One of the many highlights of this very Irish video includes an elderly gentleman by the name of Anthony Fitzgerald, who sets the scene, opening the video with a re-enactment of an authentic walrus call.

As the correspondence from RTÉ News further describes, the weary walrus was reportedly spotted by a five-year-old girl by the name of Muireann Houlihan, who was out walking with her father, Alan, who described it as being the size of a “bull or a cow.”

While there are numerous theories on how it came to arrive, the main ones including falling asleep on a floating iceberg, or chasing a female. Perhaps you’ll come up with your own theory after watching it for yourself:

But where is the Arctic walrus now?

Although there are no recent sightings today, it is believed that he is off munching on scallops somewhere in the harbour.

“Hopefully he is looking for food, foraging for invertebrates and shellfish but then again we don’t know what condition he’s in so we’re not sure if he’s capable of doing that,” said William Hunt, National Parks and Wildlife Service (NPWS) ranger and marine biologist.