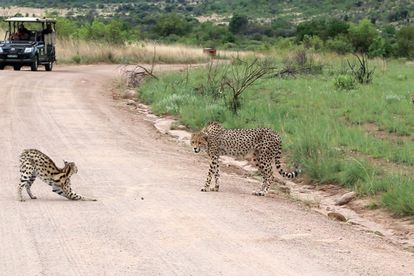 Watch this incredible sighting as a lone serval manages to keep four cheetahs at bay – and survive to tell the tale! Photo: Latest Sightings website

Watch this incredible sighting as a lone serval manages to keep four cheetahs at bay – and survive to tell the tale! Photo: Latest Sightings website

This serval found itself in the wrong spot at the wrong time. Or so it thought. Watch the incredible sighting as a lone serval managed to keep four cheetahs at bay and survived to tell the tale!

This once-in-a-lifetime sighting was captured by Mika Solomon and Gavin Newfield while on a holiday with Ivory Tree Lodge at Pilanesberg Game Reserve in South Africa.

WATCH | IS THIS THE MOST EXCITED BABY RHINO EVER?

Newfield tells LatestSightings.com the story: “Upon approach, we saw a distant wildebeest mimicking the aesthetic of a buffalo, this brought the vehicle to a halt. Mika tapped my shoulder, pointing out that a servaI lay ahead. Having never seen a serval, I immediately dismissed the idea that the wildebeest could have been a buffalo and turned my attention to this gorgeous creature.”

“Quickly, the attention of our driver was caught, whispers echoed a silent Hilux as mentions of a cheetah started to creep through and low and behold, 4 cheetahs, a serval and a wildebeest characterised what I consider to be the greatest sighting of my life so far.”

“Shocked, a need to both film and be in the moment, the sighting held my attention like the nerd in the front seat at school. It was an incredible sighting.”

“The sighting ended when the serval took an opening to exit the battle for territory, as the cheetah recognised the serval’s attempt, he shot towards the serval’s path, but, despite the rustling of leaves, nothing of those two was to be seen again.”

“Perhaps out of peer pressure, the other 3 cheetahs chased the wildebeest beyond human sight and just like that it was over.”