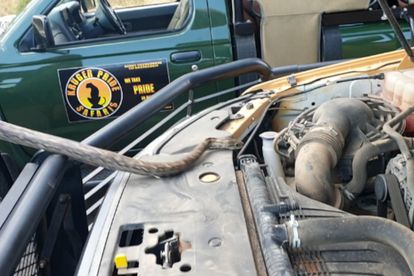 Southern African pythons are the largest snake found in Africa and although common, are not often seen in the Kruger National Park. Photo: Latest Sightings website

Southern African pythons are the largest snake found in Africa and although common, are not often seen in the Kruger National Park. Photo: Latest Sightings website

Southern African pythons are the largest snake found in Africa and although common, are not often seen in the Kruger National Park.

How would you feel if you saw a python slither into your car?

These guests were lucky enough to witness a python do just that, and yes, everyone lived to tell the tale!

This sighting was captured by Kerry Balaam, a nature guide for Kruger Pride Safaris, and Raj Chinsamy, who was on a drive with Arun from Legend Safaris.

It is currently winter in South Africa, and it can get quite cold. Since snakes are cold-blooded, they have been known to slither into car engines, attracted by the warmth.

This is exactly what was witnessed here.

A nervous python was found slithering on the open road and as a car drew near it felt the heat from the engine and was attracted to its warmth. It then decided to climb into the car’s engine, instead of retreating to the bush.

Balaam told LatestSightings.com the story: “While we were on a game drive in the park I stopped to talk to Arun from Legend Safaris who had stopped his vehicle in the road. The reason he had stopped was because a python was slithering down the road. It quickly moved underneath the vehicle and then into the engine!”

“Jan, who is an excellent guide, was on the drive with me. He offered to help Arun remove the python from the engine. At first, it was only 2 vehicles at the sighting. However, within a few minutes, a couple of cars had parked nearby to watch the action unfold. The python was very reluctant and took some coaxing to get out of the engine. After the ordeal, the python was released back into the bush.”

“After seeing the python, we were all in high spirits as spotting a python in the park is not an easy thing to do!”