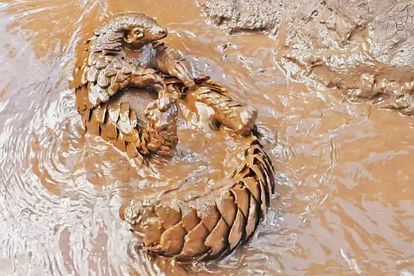 Pangolins are sadly on the endangered list with their scales in high demand in the illegal wildlife trade. Photo: Latest Sightings website

Pangolins are sadly on the endangered list with their scales in high demand in the illegal wildlife trade. Photo: Latest Sightings website

Pangolins are the endangered list. Their scales are in high demand in the illegal wildlife trade. They have been dubbed the world’s most trafficked mammal.

A disheartening 2.7 million pangolins are poached from the wild every year. These amazing creatures possess no vocal cords and their only defence is to roll into a ball and lay still. This makes it easy for poachers to capture and conceal them.

WATCH | CRAB TAKES ON A PRIDE OF LIONS

WATCH | IS THIS THE MOST EXCITED BABY RHINO EVER?

According to the Latest Sightings website, the vulnerability of these animals is why the Zululand Conservation Trust has dedicated a large number of our conservation funds towards the protection, rehabilitation, and monitoring of these incredible animals.

Ditsi is a Temmincks’s pangolin who is being rehabilitated at the Manyoni Private Game Reserve. She was rescued from the illegal wildlife trade during a sting operation led by law enforcement officers. This helpless pangolin was taken by illegal traffickers in the North-Western province of South Africa in 2021. Thankfully at Manyoni, she is recovering well and enjoying her refreshing afternoon swims.

While in the hands of poachers these pangolins deteriorate due to stress, dehydration, and lack of food. Thankfully there are incredible people fighting against the illegal trade. Thanks to rescue efforts at the Johannesburg Wildlife Veterinary Hospital they give every animal confiscated a second chance at life as well as the opportunity to live freely in the wild. When a pangolin arrives, the dedicated team nurses the injured and sick pangolins back to health. When they are strong enough, the rehabilitated pangolins are taken to a suitable reserve where the “soft release” process begins. Here they are given the opportunity to be released back into the wild.

Ditsi the swimming pangolin, is currently being supervised by the Zululand Conservation Trust. When she is released back into the wild she will be monitored by the team. This will help them gain a better understanding of her behaviour which will assist with future conservation efforts. All of the work that goes into her management is done by the African Pangolin Working Group.

Pangolins are fascinating animals and can eat up to 70 million insects each year. Their sticky tongue reaching 71cm in length allows them to slurp up insects.

All pangolins are covered in scales made of keratin – the same material as human fingernails. Their tough armour provides protection from predators – not even lions are able to bite through the tough scales.