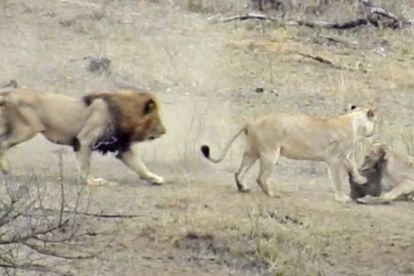 In this latest animal sighting, this male lion’s eagerness ruined the hunt for everyone! Lucky warthog is all we can say! Photo: Latest Sightings website

In this latest animal sighting, this male lion’s eagerness ruined the hunt for everyone! Lucky warthog is all we can say! Photo: Latest Sightings website

In this latest animal sighting, this male lion’s eagerness ruined the hunt for everyone!

Cobus Visser captured this incredible “rescue” while driving on the river road in Marloth Park.

Visser told LatestSightings.com the story: “I was driving right next to the fence in Marloth Park, which was overlooking the Kruger National Park. I was looking out to see if I could spot any wildlife in the Crocodile River. We knew about the pride of lions that were staying and hunting in that area for a couple of days now, so when we saw a few cars stopped and people standing next to the fence looking towards the river, we were sure it was the pride of lions.”

“We were right! We first saw the male and after a while, we spotted the lionesses. At first, they seemed calm and relaxed. But, suddenly, the females got up, lined themselves up, and the hunt started.

“Emotions were through the roof! Visiting the park for more than twenty years, I’ve seen the aftermath of kills a couple of times, but never a hunt and then timing it well enough to capture it on camera too! That was the best luck of all. For me and my family, it was the best scene ever after all these years of visiting Kruger Park.

“The sighting ended with this WOW feeling. What we saw just now, we saw a hunt, a catch, and this fun moment where the catch got away because of the dominance of the male reacting too early, trying to claim perhaps what was not his.

“To me, this was for sure one of, if not the, best sighting I have ever experienced after all the years visiting Kruger. When you drive on safari, drive slowly then you will see plenty.”