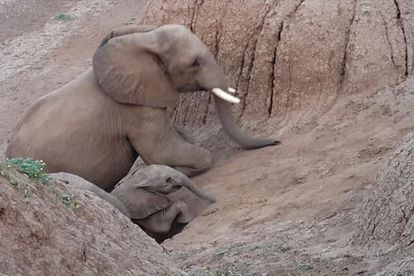 In this latest animal sighting, an elephant herd’s matriarch uses her trunk to help lift a baby elephant up the side of a riverbank. Photo: Latest Sightings website

In this latest animal sighting, an elephant herd’s matriarch uses her trunk to help lift a baby elephant up the side of a riverbank. Photo: Latest Sightings website

In this adorable latest animal sighting, an elephant herd’s matriarch uses her trunk to help lift a baby elephant up the side of a riverbank as he finds himself stuck.

The elephant herd was trying to get out via a steep path on the riverbank, but the young calf kept slipping. The matriarch came up from behind and gave the young calf a helping hand, nudging the little one on its way.

This rare sighting was captured by 62-year-old Wildlife Filmmaker, Kim Wolhuter, while on a drive along the Majale River, in Mashatu Game Reserve, Botswana.

Wolhuter told LatestSightings.com the story: “The Majale river only flows for a few months of the year, but even once the surface water has disappeared there is still water under the sand, which elephants will often dig to get to the water. I had been driving along the riverbank for the last several kilometres seeing who was taking advantage of these dug holes. The northern bank is continuously being cut away with each flood, but, in certain places, elephants have managed to maintain steep paths out from the riverbed.”

“I was passing one such path when I saw an elephant about to make her way up the bank. I stopped to watch as I always marvel at the agility of these huge beasts. Two elephants climbed the bank and moved on. Then the rest of the family followed, led by a cow. She was going up but then her calf got stuck on the steep ledge. The calf was battling away, and at first, the mother wasn’t aware of what was going on. The matriarch, coming from behind, gently pushed and nudged the little one up the steep ledge and on its way again.”

“Its mom only later realised what happened and was coming to the rescue, but her little one had already been helped.”

“We all know that elephants are caring and help each other and the matriarch of the herd came to the rescue, making sure no one was left behind!”