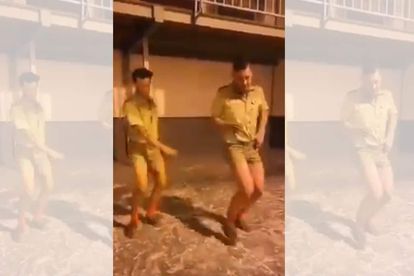 At the end of 2020, two young men went viral after introducing a brand new dance challenge to TikTok.

JacarandaFM reports that a video of two young men dressed in PT shorts and veldskoene, dancing to MFR Souls’ Amanikiniki, went viral and South Africans put their dancing shoes on for this one as well.

The video has been shared thousands of times Twitter, even getting a thumbs up from Julius Malema!

“There can be no better way to celebrate our South African-ess than joining the global phenomenon that is spreading across the world, and that is the Jerusalema dance challenge….the Jerusalema song that I love so much. So I urge all of you to take up this challenge and show the world what we are capable of,” Cyril Ramaphosa said during an address to the nation in 2020.

HOW TO DO THE JERSUALEMA DANCE IN FIVE STEPS

Put your left foot in front of your right foot and step four times, with a swinging motion coming from the hips. Your feet should be tapping the ground.

Then switch to your right foot in front of your left foot, and repeat the four-tap motion.

The comes something of a shuffle: While remaining on the spot, replicate a walking motion by putting one foot in front of the other, taking four ‘steps’ in total.

You’re then required to ‘bounce’ forward, walk forward four steps, then walk backwards four steps. Meanwhile, your upper-body can ‘freestyle’ as the beat goes on.

After completing the previous stage, you then turn to your left and walk backwards four steps, incorporating the same moves as before. After taking these four steps, you’re required to ‘shake’ on the spot, before the whole process starts again