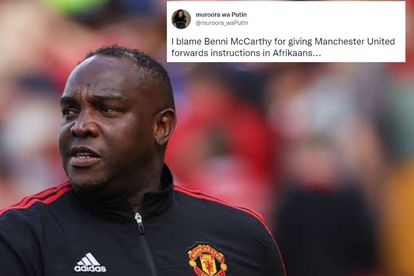 The former soccer star-turned Man United coach of the first division was roasted on Twitter after the team lost their match 4-0 to local English league Brentford.

The muso posted a video on his social media of the Cape Town-born athlete coaching Manchester United football club – and in particular, Cristiano Ronaldo, who FIFA hailed the “highest-scoring male in international football history”.

He captioned the clip: “One of the most epic things I’ve ever seen in my entire life”. He also called his soccer idol the “goat of all goats”.

AKA also hailed Benni McCarthy a “hero” and revealed he would be getting a tattoo of him in his honour.

Not long after AKA’s posts, Benni McCarthy found himself trending on Twitter for all the wrong reasons.

And it had everything to do with Manchester United’s dismal loss, which put them at the bottom of the league. In fact, many claimed that the club had reached “rock bottom”.

Here’s what tweeps had to say about Man United and Benni:

@Ralphium: “Is Benni McCarthy giving the forwards instructions in Afrikaans or what?”

@mishcarrr: “Benni McCarthy on his way back to Cape Town”

@SizzleTrev: “What if Benni is behind Man United’s downfall?”