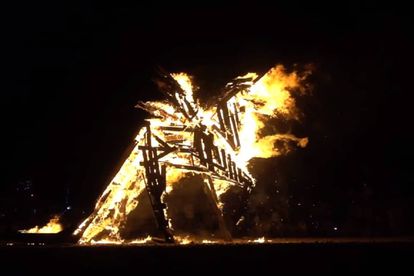 AfrikaBurn 2019 – the Burning Man regional gathering at Africa’s Tankwa Karoo National Park – is back for the 13th time! The festival, which adopted the traits of America’s Burning Man, is back to create a ‘temporary city of art’ once more.

The event, which will run from 29 April to 5 May 2019, is the result of the creative expression of a community of volunteers who, once a year, gather in the Tankwa Karoo to create a temporary city of art, theme camps, costumes, music and performances.

“AfrikaBurn’s aim is to be radically inclusive and accessible to anyone,” states AfrkiaBurn’s official website. “The touchstone of value in our culture will always be immediacy: experience before theory, moral relationships before politics, survival before services, roles before jobs, ritual before symbolism, work before vested interest, participant support before sponsorship.

“Nothing is for sale but ice at the event. Nothing. There are no vendors, no advertising or branding. It just doesn’t fit in.

It’s not even a barter economy – it’s a decommodified zone with a gift economy that’s about giving without expecting anything in return.”

All in all, there is no water, no shops, no food stalls, no bar and no signal. Participants are only required to take what is deemed absolutely necessary. If you want to go, the team over at AfrikaBurn suggest you read the survival guide from cover to cover.

Can I still buy tickets to AfrikaBurn 2019?

AfrikaBurn’s general sales might be closed, but resold tickets can be purchased via TicketPony or ticket transfers until Friday, 3 May.

AfrikaBurn are based on the ten principles of Burning Man, to which they also added an 11th, in 2011.

This year’s theme is Ephemerality which is the concept of things being transitory, existing only briefly.

See what AfrikaBurn is all about in the video below: