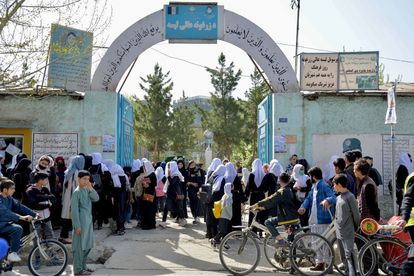 Girls leave their school following order of closure just hours after reopening in Kabul on 23 March 2022. The Taliban ordered girls’ secondary schools in Afghanistan to shut just hours after they reopened, an official confirmed, sparking confusion and heartbreak over the policy reversal by the hardline Islamist group. Image: Ahmad Sahel Arman / AFP

Girls leave their school following order of closure just hours after reopening in Kabul on 23 March 2022. The Taliban ordered girls’ secondary schools in Afghanistan to shut just hours after they reopened, an official confirmed, sparking confusion and heartbreak over the policy reversal by the hardline Islamist group. Image: Ahmad Sahel Arman / AFP

The Taliban ordered girls’ secondary schools in Afghanistan to shut on Wednesday just hours after they reopened, an official confirmed, sparking confusion and heartbreak over the policy reversal by the hardline Islamist group.

He would not immediately explain the reasoning, while education ministry spokesman Aziz Ahmad Rayan said:

An AFP team was filming at Zarghona High School in the capital, Kabul when a teacher entered and said the class was over.

Crestfallen students, back at school for the first time since the Taliban seized power in August last year, tearfully packed up their belongings and filed out.

“I see my students crying and reluctant to leave classes,” said Palwasha, a teacher at Omra Khan girls’ school in Kabul.

“It is very painful to see your students crying.”

TALIBAN INTERFERE WITH EDUCATION FOR AFGHAN GIRLS ONCE AGAIN

“If true, what could possibly be the reason?” she tweeted.

When the Taliban took over last August, schools were closed because of the COVID-19 pandemic, but only boys and younger girls were allowed to resume classes two months later.

There were fears the Taliban would shut down all formal education for girls, as they did during their first stint in power from 1996 to 2001.

The international community has made the right to education for all a sticking point in negotiations over aid and recognition of the new Taliban regime, with several nations and organisations offering to pay teachers.

On Wednesday, the order for girls’ secondary schools to resume appeared to only be patchily observed, with reports emerging from some parts of the country — including the Taliban’s spiritual heartland of Kandahar – that classes would restart next month instead.

But several did reopen in the capital and elsewhere, including Herat and Panjshir – temporarily at least.

“All the students that we are seeing today are very happy, and they are here with open eyes,” Latifa Hamdard, principal of Gawharshad Begum High School in Herat, told AFP.

The education ministry said reopening the schools was always a government objective and the Taliban were not bowing to international pressure.

“We are doing it as part of our responsibility to provide education and other facilities to our students,” ministry spokesman Rayan told AFP Tuesday.

The Taliban had insisted they wanted to ensure schools for girls aged 12 to 19 were segregated and would operate according to Islamic principles.

The Taliban have imposed a slew of restrictions on women, effectively banning them from many government jobs, policing what they wear and preventing them from travelling outside of their cities alone.

Even if schools do reopen fully, barriers to girls returning to education remain, with many families suspicious of the Taliban and reluctant to allow their daughters outside.

Others see little point in girls learning at all.

“Those girls who have finished their education have ended up sitting at home and their future is uncertain,” said Heela Haya, 20, from Kandahar, who has decided to quit school.

“What will be our future?”

FEW AVENUES GIVEN FOR AFGHAN GIRLS TO APPLY THEIR EDUCATION

It is common for Afghan pupils to miss chunks of the school year as a result of poverty or conflict, and some continue lessons well into their late teens or early twenties.

Human Rights Watch also raised the issue of the few avenues girls are given to apply their education.

“Why would you and your family make huge sacrifices for you to study if you can never have the career you dreamed of?” said Sahar Fetrat, an assistant researcher with the group.

The education ministry acknowledged authorities faced a shortage of teachers – with many among the tens of thousands of people who fled the country as the Taliban swept to power.

“We need thousands of teachers and to solve this problem we are trying to hire new teachers on a temporary basis,” the spokesman said.