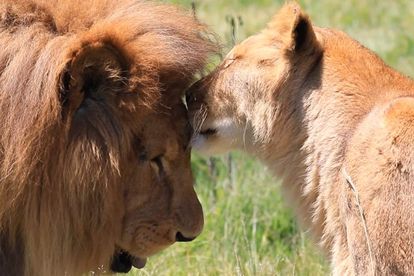 Ahead of Valentine’s Day, Animal Defenders International (ADI) has released a different kind of love story – between two lions called Tarzan and Tanya.

The lions, now living at the ADI Wildlife Sanctuary (ADIWS) in South Africa, spent seven years in a Guatemalan circus, in a small, barren cage the size of a queen-size bed.  The video Love Conquers All captures their trials, tribulations, devotion to each other and their journey to freedom

Jan Creamer, ADI President, who led the rescue operation in Guatemala, said: “This is an inspiring story of the incredible love, loyalty and bravery of these animals.  A true Valentine’s Day story with a happy-ever-after ending.”

During their time in the circus, Tarzan suffered horrific injuries when he was attacked by a tiger; his lower lip was torn from his chin and droops down to this day. Tanya, Tarzan’s tiny but loyal protector, still bears scars on her face, ears and back from trying to defend Tarzan during the fight.

Tarzan and Tanya’s gentle affection for one another inspired hundreds of thousands when a video of Tarzan tenderly grooming Tanya’s head went viral as the lions awaited their relocation to South Africa. Now the resident sweethearts of the ADIWS, the lions cuddle up together and Tarzan still kisses Tanya goodnight.

Love Conquers All: A series

Love Conquers All is the first episode in a series of three short films being made by ADI to highlight the relationships and emotional needs of animals.

Next in the series is Love Reunited featuring Senior lions Leo and Muñeca, aged 17 and 16, who spent a decade in a circus in Peru. The circus had cut off their toes to prevent their claws from growing and both had never felt the grass beneath their paws or the sun on their backs.

Leo was rescued when ADI helped enforce Peru’s ban on circus animals in 2014, but the circus blocked the removal of the lionesses and went into hiding. Six months later, ADI and officials tracked down the circus in a remote village and reunited Muñeca with the rest of her family.

Today, Leo and Muñeca can be found by each other’s sides at all times and remain active for their age. The charming couple, who are parents to many of the lions at the ADIWS, are known to explore every nook and cranny of their habitat.

Born in a circus in Guatemala, six-year-old Sasha and Kumal knew only fear and a bare cage. Neither had ever walked on grass but burst into life at the ADI Temporary Rescue Unit—playing fast and rough, their first ever splashing in the pool, chasing and pouncing on one another—simple joys they had never been allowed to experience before.

When they were released at the sanctuary, while the other animals carefully checked out their new surroundings, Kumal and Sasha threw themselves into a vigorous tug of war with a tyre hanging in their enclosure.

But they also show tenderness.  On the night they were rescued, as cranes unloaded lions and tigers all around them, they fell asleep with their front legs wrapped around each other.  Despite Kumal’s large size, it is Sasha who is the bolder of the two and usually leads the way to explore new space.

“Throughout our years of rescuing animals, we’ve seen even the most traumatized individuals display an incredible capacity for love,” Cramer added. “Thanks to our supporters, and governments who end cruel animal circuses, we have been able to rescue these animals and bring them to a place where they can enjoy something of the life they lost—with space, natural environment, and freedom to choose.”

ADI has worked with government officials in a number of countries to enforce their circus animal bans, rescuing close to 200 animals. The rescues have included epic airlifts from South America all the way to South Africa.

The couples in the videos are now living contented lives at the sanctuary, a safe haven for 40 rescued lions and tigers.

Special Valentine’s Day Adoption packages are available to support the care of the Tarzan, Tanya, Leo, Muñeca, Sasha and Kumal. These include a personalised certificate featuring the couple, a Valentine’s Day card, the ADI Rescuer newsletter, rescue updates and a beautiful photograph of the animals suitable for framing. Please visit: https://adiwildlifesanctuary.org.za/2021/02/03/valentines-day-gift-adoptions/