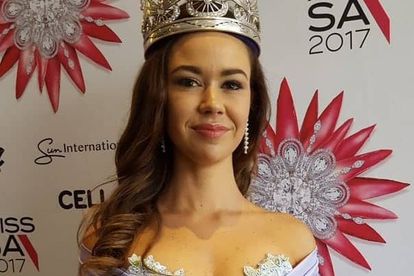 The official Miss SA for the next six months, Adé van Heerden

The official Miss SA for the next six months, Adé van Heerden

As Demi-Leigh Nel-Peters basks in the success of her Miss Universe crown, it seems like there’s no space for two tiaras on her head. Instead, she’s had to vacate the Miss SA title, which has now gone to Adé van Heerden.

Van Heerden finished second in this year’s Miss SA pageant, but now takes the title for the next six months. She was officially given the accolade at a ceremony held at The Maslow, in Sandton (JHB) earlier this afternoon.

Contrary to popular belief, these titles aren’t just the end product of some beauty contest. They come with real life responsibilities and roles. Demi-Leigh Nel-Peters has had to relocate to New York City to fulfil certain obligations that come with the crown, meaning she’s no longer able to carry out the roles of Miss SA.

You may recall something similar happening with Rolene Strauss. Also a former Miss SA, Strauss had to vacate her national tiara once she was crowned Miss World. The Bloemfontein Beauty then had to undertake several international commitments that saw her spend most of her time outside of Mzansi.

Who is the new Miss SA, Adé van Heerden?

Adé finished runner up to Nel-Peters in the 2017 competition. Pageantry aside, Miss van Heerden is an exceptional person. Her day-job is as a medical doctor and lieutenant at Military 2 Hospital in Cape Town.

Thank you, South Africa. My hope is to serve you well as your new #MissSA2017. pic.twitter.com/Dkseml2VhK

Her ambitions for the role come across as incredibly noble, too. She states that her time will be spent promoting body-positivity, working with South Africa’s youth, and teaching young women to ‘believe in themselves’

“I look forward to growing the Miss South Africa brand and working with the class of 2018. I believe that it is important to invest your time and share as much knowledge as possible with the youth.”

During my time as first princess, I dedicated myself to teaching young women about their bodies, self-love, making healthy choices and self-belief. I hope to continue to do so. I will also continue building on the work that Demi-Leigh has done so far. My mission is to be of service to my country in whatever way needed.”

Congratulations, Adé. Let’s hope your next six months of service are enjoyable and productive.