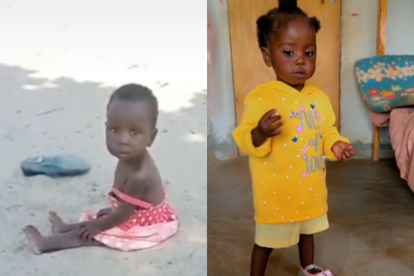 This little one was rescued from the streets after getting abandoned by her mother. Images via TikTok: @tusaiweyana

This little one was rescued from the streets after getting abandoned by her mother. Images via TikTok: @tusaiweyana

A little girl who was found abandoned on the streets but was adopted by welfare has managed to creep into many hearts. Taking to TikTok, the welfare shared photos of the little one when she was found and some of how healthy and happy she looks now, and many hearts absolutely melted.

The post has since gone viral with over 3 million views and thousands of comments.

Abandoned baby does great in welfare

A little girl who has made it against all odds has left many people’s hearts overwhelmed with emotions. A video of the little one was shared on TikTok by @tusaiweyana on 21 April and shows the little one sitting in a dusty road all by herself.

The photo was captioned; “the day the police found her in the streets.” The next snap shows more photos of the child who appears unable to walk, this was captioned “she couldn’t move her legs and so we thought she was disabled.”

Another caption also shares that she was abandoned by her mother shortly before she was found.

The last photo however shows the little one all grown up and miraculously standing on the legs that she wasn’t previously able to use.

Omg this made me cry 🥺looking at how fast they grow ❤️

TikTokers are overcome with emotions

The post received millions of reactions and comments from social media users who shared heartwarming messages about the little girl and the fact that she was rescued from the streets.

“It makes me cry😭😭how can a mom do this to her child??? Thank God there are good people who found her.”

“What a beautiful Angel! Thank you for taking care of her.”