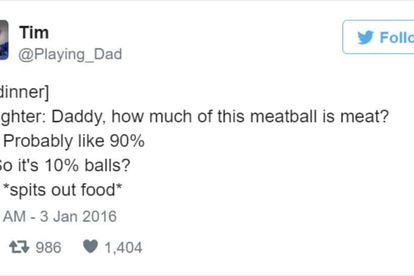 Fatherhood can bring a lot of joy and a lot of worries. If you’re a dad you’ll totally relate to these guys tweeting about their experience as parents. Even Celebrity dad, Ryan Reynolds has had a lot to say about parenting.

And it is hilarious.

3. You can get away with this when they are young:

8. When you’re still trying to figure it out after 18 years: 10. Kids are full of surprises: Tip: It's important parents take little "time outs" for themselves too. Even if you feel pretty guilty when you return 14 years later.

A fan asked him how he would react to his daughter dating when she gets older:

Like all teenagers, I went on hundreds of dates. With The Bible. She'll be fine! https://t.co/BiWcBfkWmw

My daughter just sneezed into my yawning mouth. Seemed really fucking pleased with herself. Joke's on her. She'll have to bury me someday.

I'd walk through fire for my daughter. Well not FIRE, because it's dangerous. But a super humid room. But not too humid, because my hair.

On Fathers Day, my daughter smiled at me.

It was all the gift I needed as I packed a bag and left for 6 years to write a book on parenting.

My daughter's only 6 months old and already drawing. I'd hang it on the fridge but honestly, it's absolute garbage.

Do you have anything to say as a father? How do you experience it?