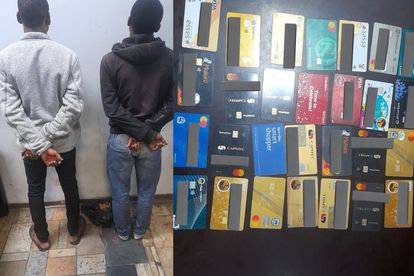 JMPD spokesperson Xolani Fihla said that on Thursday, 24 November 2022, officers received information about four males who were robbing members of the public of bank cards.

“The suspects were allegedly targeting females and senior citizens by blocking the ATM card reader and quickly offering assistance to unsuspecting victims.”

Officers received a description of the suspects and swiftly proceeded to the area for observation.

“Whilst monitoring officers saw two men who matched the description given walking on Abel Road towards Fife Avenue. The two were caught just before they could enter Concordia Hotel which was later discovered to be their place of residence,” Fihla explained.

He further said the males were searched and multiple bank cards were found in their possession.
“Upon questioning, the suspects admitted that they were robbing people at ATMs.
The duo, South African nationals were arrested and detained at Hillbrow SAPS where a case docket was opened for further investigations,” Fihla concluded.

SAFETY TIPS FOR THE FESTIVE SEASON