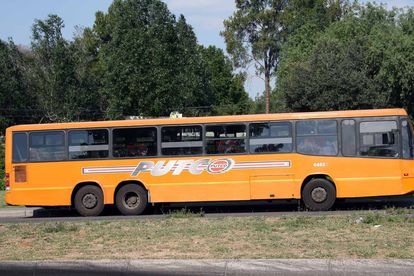 Putco buses have been suspended in Orlando and Greater Soweto for the next three months.
Image via Wikimedia Commons/Bob Adams

Putco buses have been suspended in Orlando and Greater Soweto for the next three months.
Image via Wikimedia Commons/Bob Adams

Orlando and Greater Soweto passengers who use Putco buses will now have to travel using alternative routes for the next three months due to the planned closure of Klipspruit Valley Road (section between Sofasonke Street / Kumalo Main Road and Moroka Nancefield Road).

According to the Johannesburg Roads Agency, the closure will be for three months starting from 15 August to 14 November 2022.

The Johannesburg Road Agency explained that the structure below the Klipspruit Road is subject to collapse if not repaired and is an impending danger to motorists.

The road agency’s head of department for infrastructure development, Ridhwaan Mahomed said they appeal to road users and the community using Klipspruit Valley Road to find alternative roads to avoid unnecessary incidents due to the emergency closure of the section between Sofasonke Street/Kumalo Main Road and Moroka Nancefield Road.

Putco said Klipspruit Road is one of the busiest routes its buses operate on and some of the passengers will be affected.

Spokesperson, Lindokuhle Xulu said the closure will have an impact on their normal operational patterns as adjustments to routes will be affected.

“It is regrettable that these alterations will inconvenience our passengers, however our operations team is working around the clock to find viable solutions that will be communicated on our official Facebook page and through existing structures as soon as possible.”

Putco recently announced that it has halted its previously announced fuel related fare hike for now.

This is reportedly due to continuous engagement with relevant government authorities about possible and sustainable solutions to cushion the commuters.

In July, Putco said fare increase would commence on 1 August. The increase will range from R2 for short trips, up to R7 for long trips.

The bus company which operates in Gauteng, Limpopo and Mpumalanga said it understands the toll the country’s economic challenges take on each individual and it remains committed to continue to absorb the fuel cost, pending discussions with government.