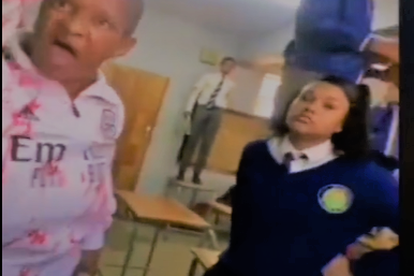 An altercation between a parent and a teacher has been widely circulated online. Image: Screenshot from @Jenny_Oliphant1

An altercation between a parent and a teacher has been widely circulated online. Image: Screenshot from @Jenny_Oliphant1

A teacher at Fred Norman Secondary School in Ennerdale, Grasmere, Gauteng has been suspended following an alleged verbal altercation with a learner’s grandparent that took place on Friday, 12 August 2022.

The alleged altercation was captured on video that has now gone viral on social media platforms.

The Gauteng Department of Education has launched an investigation into circumstances surrounding this incident and said the outcome will be communicated in due course.

Spokesperson, Steve Mabona confirmed that  the affected educator has been precautionarily removed from the school until further notice.

Mabona said educators must always be exemplary figures in schools by maintaining a high command of good conduct and teaching learners with dignity.

“We also implore parents to use appropriate channels to address their grievances rather than resorting to other platforms. Furthermore, schools are institutions of learning and they should be treated as such.”

It is not clear what caused the altercation, however, the teacher is believed to be the one recording the incident and can be heard saying several swear words to the grandparent.

The teacher also goes as far as calling the parent trash and saying that she hates Coloured people, however, most of the pupils at the school are Coloured.

The grandparent also questions the teacher why she doesn’t go back and teach where she is from if she hates Coloureds this much.

Earlier this year, a teacher at Wessel Maree Secondary School in Odendaalsrus, Free State was also suspended with immediate effect after a video circulating on social media showed him violently pushing a learner.

The Free State Department of Education said it has noted the video with grave concern and was investigating the matter.

“Schools should be centres of learning and teaching conducive to the delivery of quality education.

“Together with all our stakeholders, we have developed a plan to tackle these challenges in our schools across the province and Lejweleputswa District in particular where the incident is alleged to have taken place.”

Free State Education MEC Pule Makgoe also appealed for calm following the incident and called on both learners and teachers to work together.

He also warned against elements who may want to use this unfortunate incident for their political mileage.

“We have launched an investigation to look into this unfortunate incident. At this stage, we do not know all the details pertaining to the incident. The investigation, once complete, will shed more light into what transpired. The department will, on the strength of the evidence at our disposal, then be able to make an informed decision on what action to take,” he explained.