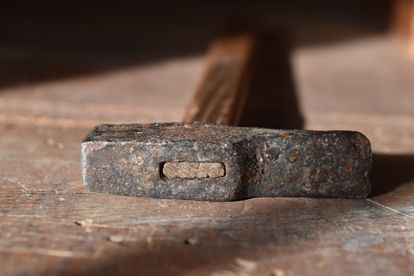 A 30-year-old suspect was arrested in connection with a Free State double murder. Photo: Pixabay.

A 30-year-old suspect was arrested in connection with a Free State double murder. Photo: Pixabay.

The police in the Free State made a breakthrough when they received information about the whereabouts of an alleged member of the “Hammer gang” in Thabong on Monday, 17 January.

Earle said a hammer is used to break through a wall and gain entry in the robberies.

Members of the Welkom Public Order Police’s Task Team followed up on the lead on Monday and found the suspect in Thubelisha, Thabong.

“At the house, some of the suspected stolen properties and cash were found. The suspect also admitted on the spot that he is indeed one of the so-called “hammer-gang” members,” said the police spokesperson.

Further investigation led to the arrest of another “Hammer gang” member at his home in Dooringpan, Thabong and more suspected stolen items were recovered.

The suspects – aged 28 and 29 – are expected to appear before the court on charges of possession of suspected stolen property and business robberies.

“This is a major breakthrough as these two suspects can be linked to at least ten cases in the area. I applaud the members for their diligence and swift reaction,” said the Free State Provincial Commissioner Lieutenant General Baile Motswenyane.